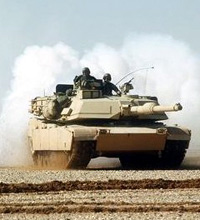 The core armor is a variation on the British Chobham armor -- an arrangement of metal plates, ceramic blocks and open space. HEAT and Sabot rounds may make it through the outer layer of the armor, but they won't make it all the way into the crew compartment. The ceramic material can absorb a lot of heat, as well as heavy physical blows. The rest of the hot gases or metal pieces spread out in the empty air pockets.

Updated M1 tanks have extra layers of steel and depleted uranium that supplement the Chobham-style armor. This combination will hold up to any tank round and most missiles (the powerful Hellfire missile is a notable exception).

The crew keeps the M1's rounds in heavily armored storage compartments. If something sets the ammunition off, the armored structure keeps the explosion from blasting the crew or completely destroying the tank. An onboard fire suppression system will quickly extinguish any fires that occur inside the tank.

The M1 is also equipped to handle chemical or biological attack. An advanced air filter system purifies all air coming into the tank so the crew isn't at risk.

The tank can avoid attack entirely by hiding from the enemy. The tank has two turret-mounted grenade dischargers designed to launch smoke grenades in all directions. The crew can also inject a little diesel fuel into the exhaust to generate a cloud of heavy smoke.

In the next section, we'll look at the members of an M1 crew and the jobs they do.