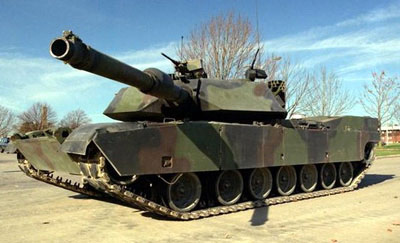 The M1's primary weapon is a 120-mm M256 smoothbore cannon made by the German company Rheinmetall Landsysteme GmbH. The "120-mm" designates that the cannon fires 120-mm-wide rounds. "Smoothbore" means the inside of the barrel is smooth, rather than rifled like most hand guns. Smoothbore guns don't stabilize rounds as well as rifled guns, but they can fire rounds at higher velocities without suffering heavy damage.

Sabot rounds work like a basic arrow. They don't have any explosive power; they penetrate armor with shear momentum. The heart of the sabot round is the penetrator -- a narrow metal rod (typically depleted uranium) with a pointed nose on one end and stabilizing fins on the other. Before the round is fired, the rear part of the penetrator is attached to a propellant case, and the front part is attached to the sabot structure. The sabot's purpose is to keep the narrow penetrator centered in the wide gun barrel.

On firing, the propellant casing remains in the chamber, and the expanding gas pushes the sabot and attached penetrator down the barrel. The sabot is attached to the penetrator with relatively flimsy plastic, so it falls away as soon as the round leaves the cannon. The heavy penetrator flies through the air at high speed toward its target tank. Because of its narrow shape, the penetrator focuses its full force into a very small area, plowing straight through heavy armor. As the penetrator enters the tank, heated fragments of metal fly off in all directions, hitting anybody and anything inside.

The sabot separates from the penetrator as a sabot round flies through the air.
Photo courtesy U.S. Army

HEAT rounds use explosive firepower, rather than momentum, to penetrate armor. At its nose, the round has an extended impact sensor. When the impact sensor collides with a target, it ignites an explosive, which melts surrounding copper. A shape charge liner concentrates the molten metal and hot gases into a narrow blast that cuts through the armor.

The coolest thing about the M1's weaponry is its advanced fire control system. An array of sensors constantly monitors the tank's tilt, the turret's motion and any gusts of wind, and a computer adjusts the gun accordingly to keep it aimed at its target. With this system, the M1 can take out other tanks while it's on the move. Less sophisticated tanks have to come to a full stop to hit targets reliably.