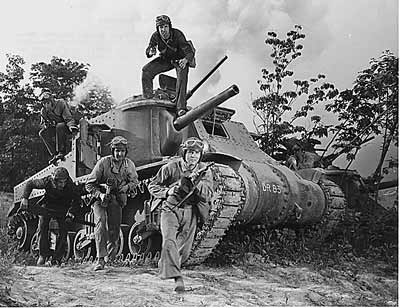 Great Britain developed the modern tank in the early 1900s as a response to the rise of trench warfare. In the battles of World War I, opposing forces dug parallel trench fortifications guarded by barbed wire and machine gunners. This strategy made for high casualties on both sides. To advance any ground, soldiers had to storm the enemy's trench, sacrificing dozens of men for the chance that a few might make it through the mud and hail of bullets.

The British and their allies needed an armored "land boat," a machine that could plow through mud, barbed wire and heavy fire to clear a path for infantry troops. The final design had six components:

­Caterpillar tracks work on the same principle as a conveyer belt. The tank engine rotates one or more steel sprockets, which move a track made up of hundreds of metal links. The tank's wheels ride along the moving track, just like the wheels in a car run along the road. Earlier tracked vehicles weren't practical in battle because their steam engines were too cumbersome and unreliable. The internal combustion engine made tracked military vehicles feasible.

Tracked vehicles can move easily over rough terrain because the track makes contact with a wide area of the ground. A car grips the ground with only the bottom portion of four tires, but a tank grips it with dozens of feet of track. Additionally, the track has heavy tread that digs into muddy surfaces, and it never goes flat like a tire.

The hull is the bottom portion of the tank -- the track system and an armored body containing the engine and transmission. The hull's job is to transport the top portion of the tank, the turret, from place to place. The turret is an armored structure supporting one or more guns -- typically a heavy cannon and a couple of machine guns.

The turret sits in a wide circle at the center of the hull. In the conventional design, a spur gear in the hull (called the traverse gear) engages an internal gear lining the inside of the turret. Turning the traverse gear rotates the turret on the hull, allowing the tank crew to aim the main gun without turning the entire tank. The crew can also pivot the main gun up and down.

Soon after the British deployed their new weapon, the Germans developed tanks of their own. With tanks on both sides, the weapon's role changed significantly. Instead of taking out trenches, today's tanks mostly battle other tanks. As we'll see in the next few sections, the M1 is specifically designed for this sort of combat.