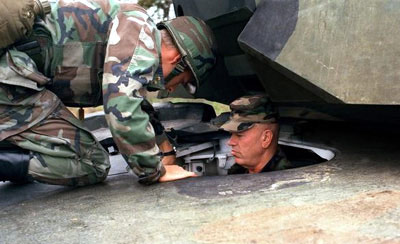 In the M1, the driver sits in the front of the tank hull.
Photo courtesy U.S. Department of Defense

The M1 is designed for a four-person crew. The driver sits in the front section of the hull, directly under the main gun. In order to fit in the confined space, he has to lean way back in a reclining, form-fitting bucket seat, sort of like a dentist chair. M1 crew members say that this is far and away the most comfortable position in the tank.

The driver steers the tank using a motorcycle-style handlebar, and accelerates by twisting a handle grip throttle. The tank has a brake pedal on the floor, just like a car.

The driver navigates using three periscopes (also called vision blocks). For night operations, he can substitute a night vision sensor for one of the ordinary periscopes. The driver also has a digital instrument panel, called the driver's integrated display (DID), which provides navigational data, as well as information about things like speed, fluid level and engine performance.

The commander oversees the tank's operation, communicates with other tank commanders and directs the rest of the crew. He has several periscopes and a joystick-controlled independent thermal night vision viewer to survey the battlefield. He can monitor the tank's various systems and its position on his integrated display.

The gunner targets enemy vehicles and bunkers and fires the main gun. He pinpoints targets using a stabilized sight, with day vision and thermal night vision capabilities, and a laser range-finder that precisely measures the distance to the target. He also controls the front machine gun and monitors the main gun's general condition.

The loader pulls rounds from the ammunition compartment and load them into the main gun. Generally, the gunner tells the loader which sort of round to load.

The loader and commander may also operate the two machine guns mounted on top of the turret. On the M1A2, they have to open the tank's two hatches and fire the guns manually, so it's not a viable option in a tank battle. The machine guns are mainly for attacking infantry soldiers.

All of the M1s on the battlefield are linked together by the inter-vehicle information system (IVIS). Using IVIS, commanders keep track of the other tanks' positions, transmit maps and share information about the enemy. In order to hide communications from the enemy, the system uses encrypted radio signals.

The combination of these advanced electronics, incredibly strong armor and massive firepower make the M1 an almost unbeatable opponent in tank warfare. But evolving technology will eventually surpass the M1, and the weapon will take its place alongside the dozens of other tanks that have come and gone over the years. In the world of military science, technological superiority has a short life span.

For more information about the M1 and other weaponry, check out the links below.