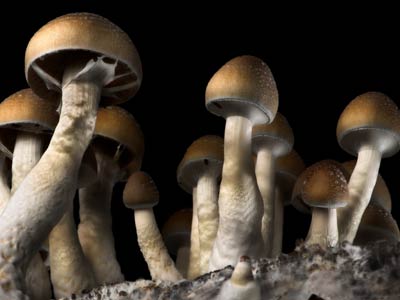 Most mushrooms cultivators start with P. cubensis because it's the most common and the easiest to grow. There are several different ways to go about growing mushrooms, but we'll just look at one basic method. All methods begin with one important element: the spore. A spore grows into a single mushroom, and a mushroom can produce hundreds of thousands of spores.

Spore prints, in addition to being used for identification of wild mushrooms, can also be used to cultivate mushrooms. The dry spores on the print must be hydrated for use. Sterility is important in all aspects of mushroom growing; bacteria or mold can keep them from growing altogether, but may also result in contaminated mushrooms. Many mushroom growers purchase spore syringes (filled with spores and sterile water) from suppliers rather than make their own. A spore syringe can cost from $10 to $20 depending on the particular strain.

Other equipment includes a large plastic container, canning jars, a pressure cooker or canner, brown rice flour and vermiculite (a mineral gravel used in potting plants), as well as basic kitchen items. The brown rice flour is mixed with the water and vermiculite to create a loose, fluffy substrate cake, a nutrient-rich environment in which the mushroom spores will grow. The substrate is then put in the canning jars, which are sealed and sterilized using the pressure cooker or canner.

After the jars cool, the substrate is inoculated with the spore syringe through holes punched in the jars' lids. Then they must be incubated at a steady temperature of about 75 degrees Fahrenheit (23.9 degrees Celsius). The spores should begin to grow within a week and typically look like ropes of white fuzz called mycelium. If mold grows instead, or nothing happens, then something went wrong.

When the cakes are covered in mycelium, they are placed into the plastic container for fruiting. While in the container, the cakes must get light and a lot of humidity. If all goes well, mushrooms begin to grow after a week or two and are ready to pick when the caps begin to turn upward. Each cake can produce mushrooms for up to a month, usually in waves. A single cake can produce hundreds of mushrooms. They can rot pretty quickly, so mushrooms are usually refrigerated or dried to preserve them.

Growing mushrooms isn't all that expensive, but obtaining the spore prints or spore syringes can be difficult because it's not always legal to buy, sell or possess them. In the next section, we'll learn about the legality of magic mushrooms.