Magic Mushrooms and the Law 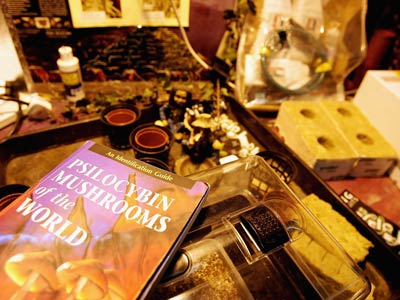 Mushroom growing kits lay on display in a store July 2005 in London, right before the sale of fresh mushrooms was prohibited.
Daniel Berehulak/Getty Images

The legality of possessing, taking, growing or selling magic mushrooms greatly depends upon where you live. In the United States, psilocybin is a Schedule I drug under an amendment to the Controlled Substances Act called the Psychotropic Substances Act. This means that it has a high potential for abuse, has no currently accepted medical use and isn't safe for use even under a doctor's supervision. Since psilocybin is a psychotropic substance in magic mushrooms, this is usually interpreted to mean that the mushrooms themselves are illegal. However, since mushroom spores don't contain psilocybin, some have pointed to this as an ambiguity in the federal law.

Usually busts related to magic mushrooms occur under state law (unless they're in extremely large amounts) and most states ban possession of them. As of February 2009, Florida is the sole exception when it comes to fresh wild mushrooms -- essentially, the law reasons that since mushrooms grow wild, it's possible for people to pick magic ones accidentally and be in possession of small amounts of without prosecution. In California, Georgia and Idaho, it's illegal to possess magic mushrooms in any stage, including spores. In addition, most states have prosecuted for anything related to mushrooms or growing them under laws related to drug paraphernalia and intent to sell. In 2019, Denver became the first city in the U.S. to decriminalize magic mushrooms.

Some growers in the United States used to purchase spores from other countries, but the Drug Enforcement Administration (DEA) began cracking down on possession of the kits in 2003. Possession and selling of fresh mushrooms and spores (dried mushrooms are almost always illegal) is still legal in many places around the world, but there has been a wave of banning them in various European countries in the 2000s. For example, until 2005, it was legal to sell fresh magic mushrooms in Great Britain. Spore possession is still legal. The Netherlands, once known as a hotbed for drugs illegal elsewhere, banned the sale of dried mushrooms in 2001 and fresh mushrooms in 2008. In other countries, it may be legal to have them but not sell them.

Some countries, such as Mexico, make exceptions to bans on magic mushrooms when used by indigenous populations in religious ceremonies. We'll look at the history of mushrooms next.

Fly agaric, or Amanita muscaria, is what many people think of when magic mushrooms come to mind. These mushrooms have bright red caps with white spots and contain a psychotropic substance called muscimol. They're also toxic when raw. In some countries, including Japan and Russia, they are considered a delicacy and eaten after boiling, which supposedly partially detoxifies them. They're weaker than psylocybin mushrooms and can have stronger, more harmful side effects.