The Lorenz Attractor: A Portrait of Chaos 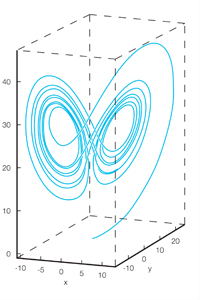 Lorenz's computer model distilled the complex behavior of Earth's atmosphere into 12 equations -- an oversimplification if there ever was one. But the MIT scientist needed something even simpler if he hoped to get a better look at the tantalizing effects he glimpsed in his simulated weather. He narrowed his problem to a single atmospheric condition known as rolling fluid convection. Convection occurs on a large scale when the sun heats air near Earth's surface faster than air higher in the atmosphere or over bodies of water. As a result of this uneven heating, warmer, lighter air rises as cooler, heavier air sinks. This in turn creates large circular "rolls" of air.

Convection also can occur on smaller scales -- in cups of hot coffee, in pans of warming water or in rectangular metal boxes heated from below. Lorenz imagined this latter small-scale example of rolling convection and set about deriving the simplest equations possible to describe the phenomenon. He came up with a set of three nonlinear equations:

The equations, with only three variables, looked simple to solve. Lorenz chose starting values -- σ = 10, ρ = 28 and β = 8/3 -- and fed them to his computer, which proceeded to calculate how the variables would change over time. To visualize the data, he used each three-number output as coordinates in three-dimensional space. What the computer drew was a wondrous curve with two overlapping spirals resembling butterfly wings or an owl's mask. The line making up the curve never intersected itself and never retraced its own path. Instead, it looped around forever and ever, sometimes spending time on one wing before switching to the other side. It was a picture of chaos, and while it showed randomness and unpredictability, it also showed a strange kind of order.

Scientists now refer to the mysterious picture as the Lorenz attractor. An attractor describes a state to which a dynamical system evolves after a long enough time. Systems that never reach this equilibrium, such as Lorenz's butterfly wings, are known as strange attractors. Additional strange attractors, corresponding to other equation sets that give rise to chaotic systems, have since been discovered. The Rössler attractor produces a graph that resembles a nautilus shell. The Hénon attractor produces an alien-looking boomerang.

As soon as Lorenz published the results of his work in 1963, the scientific community took notice. Images of his strange attractor begin appearing everywhere, and people talked, with more than a little excitement, about this unfolding frontier of science where indeterminism, not determinism, ruled. And yet the word chaos had not yet emerged as the label for this new area of study. That would come from a soft-spoken mathematician at the University of Maryland.

Stephen Smale, a Fields Medal recipient in 1966, turned his attention to dynamical systems without knowing about Lorenz's work. But like the MIT meteorologist, Smale was able to develop a model that made it possible to see the effects of chaos. It's now known as the Smale horseshoe, and it works like this: Take a rectangle made of a pliable material and squeeze it into a horizontal bar. Take one end of the bar and, pulling and bending, form a horseshoe shape. Now embed the horseshoe in a second rectangle and repeat the entire process. As you fold, bend and stretch the material, much like a pastry maker working a ball of dough, it's impossible to guess where two points, side-by-side at the beginning, will end up. Repeat the process, and your two starting points will end up in completely different locations each time.