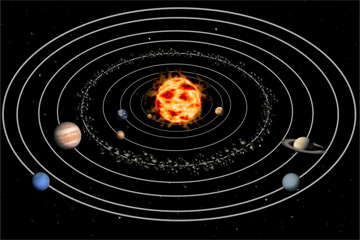 That picture makes the planet's orbits seem so tidy -- and fixed. Could chaos theory mess with that clockwork precision?
Zoonar/Thinkstock

Fair warning: If you raise exasperated eyebrows whenever someone mentions the "Butterfly Effect," then you might want to stop reading now. If, however, you like to prod the black, mysterious underbelly of the universe to see what happens, then please continue.

We all know the planets of the solar system revolve around the sun in a calm, orderly fashion. In fact, the planets move with such clockwork precision that astronomers can calculate orbital characteristics -- transits, eclipses, alignments -- with certainty. Want a list of solar eclipses for the next 10,000 years? No problem.

Now let's say you want to look further into the future -- not thousands of years, but billions. How do those dusty astronomical tables hold up then? Not so well, if you take into account the principles of chaos theory. Chaos theory says that small inputs in an enormously complex system can produce large-scale outputs. This is the aforementioned butterfly effect: When a butterfly flaps its wings in South America, a thunderstorm can develop a few continents away -- over Brisbane, Australia, let's say. Some scientists now propose that the evolution of the solar system may adhere to chaos theory and that, way, way, way into the future, Earth could collide with either Venus or Mars.

The scientists who made this proposal in a 2009 issue of Nature -- Jacques Laskar and Mickaël Gastineau -- were working at the Paris Observatory. But the scientists didn't use any of the observatory's telescopes to generate their data. Instead, they hovered over computers, including the JADE supercomputer located at Centre Informatique National de l'Enseignement Supérieur, or CINES (National Computing Center for Higher Education and Research).

All of that computing power might seem like overkill, a scientist's version of a muscle car, until you realize what they were trying to calculate. It has to do with Newton's universal law of gravitation.

Remember how Sir Isaac told us that a universal force of gravitation exists between any two objects? This force is directly proportional to the masses of the objects and inversely proportional to the square of the distance separating them. He then proposed that the sun's gravity is what holds the planets in their orbits. But, according to Newton's own law, the planets and all of the other objects in the solar system, including moons and asteroids, must also work a little gravity magic on each other. Could the complex interplay of those forces cause the stability of the solar system to degrade over time? In the short term, no. Even over longer periods, astronomers generally believed that the solar system would remain stable.

Then, a few crazy cosmologists began to wonder if chaos theory applied to planetary orbits. If so, small changes in planetary movements could get magnified over time into something substantial. But how long would it take? Thousands of years? Millions? Billions?

To answer that question, you would need to account for the movements of all the planets, as well as all of the forces being exerted as that movement occurs. Then you'd need to let the solar system run, like a clock, so that the planets cycled through hundreds of thousands of orbits. As this occurred, you would need to track key data about each planet. One of the most important pieces of data to collect would be orbital eccentricity -- the measure of how far a planet deviates from a perfectly circular shape -- because eccentricity determines whether two planets occupy the same airspace and run the risk of having a close encounter.

Think you would be able to run such a simulation in your head or with a desktop model of the solar system? Probably not. A supercomputer can though, which is why Laskar and Gastineau selected the JADE supercomputer to do their heavy lifting. Their inputs consisted of 2,501 orbital scenarios, where each one altered Mercury's orbit by just a few millimeters [source: Laskar and Gastineau]. They chose Mercury because, as the runt of the solar system, it's the biggest pushover and because its orbit synchronizes with Jupiter's to create changes that ripple across the entire solar system.

For each hypothetical scenario, they tracked the motion of all planets for more than 5 billion years (the estimated life span of the sun), letting the computer make all of the complex calculations. Even with the high-powered CPU in the JADE unit, each solution required four months of computing to generate results.

Luckily for life on Earth, the solar system remains stable in 99 percent of the French pair's scenarios -- no planets get set on collision courses or get ejected from their orbits [source: Laskar and Gastineau]. But in 1 percent of them, where the orbital chaos has the greatest cumulative effect, Mercury's orbit becomes eccentric enough to cause catastrophic changes in the solar system. Some of those catastrophes only involve Mercury, which could either crash into the sun or get dislodged from its orbit and flung out into space. But other, more troubling scenarios play out with Earth colliding into either Mars or Venus. A collision with Venus would occur through five steps, all of which illustrate the cumulative effects of orbital chaos [source: Laskar and Gastineau]:

If orbital chaos exists, its effects can't be seen over short time frames. But astronomers are gathering other clues about the instability of planetary motion. In February 2012, the European Space Agency's Venus Express spacecraft peered through the dense Venusian clouds expecting to see certain surface features that should have been there, based on data from Magellan taken 16 years earlier. Instead, those features were displaced by 12 miles (20 kilometers), suggesting that the planet's rotation is slowing down. Astronomers point to the planet's high atmospheric pressure and strong winds, which create friction on the surface, as a possible cause. If the data is right, one day on Venus may now be almost 250 Earth-days long [source: Atkinson]. 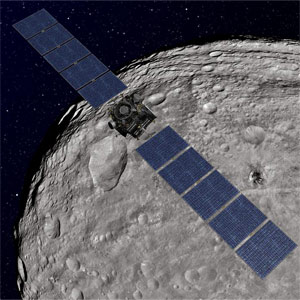 Writing this made me think of a phrase I often read when I was a kid: "the clockwork precision of the universe." Apparently, the universe isn't running with the quiet regularity of a sweeping second hand. As space telescopes and supercomputers look across the cosmos and far into the future, we're finding an unsettled, uncertain universe. But don't stop paying your taxes just yet -- it seems the Internal Revenue Service won't be going away anytime soon.