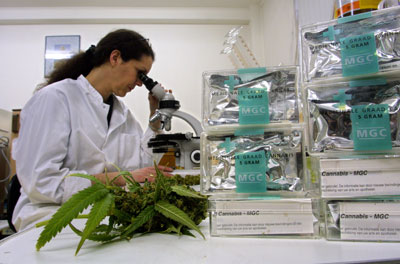 One common question associated with medical marijuana is why use it when so many other legal medications are available? Supporters respond that patients don't simply use cannabis to feel good. Instead, laws that authorize marijuana use for medical purposes work on the belief that certain symptoms and diseases can be best treated with marijuana -- just as two Tylenol may help someone's headache.

For example, marijuana has been shown to decrease nausea and increase appetite, which can be essential for patients who are having difficulty keeping down food or maintaining adequate nutrition. For glaucoma sufferers, marijuana helps to lower intraocular eye pressure. Also, some types of pain, such as peripheral neuropathy, respond better to marijuana than conventional pain relievers [source: Grinspoon]. For some cancer and AIDS patients, drugs that are supposed to boost appetite simply don't work. Other patients are tired of using medications that can be considered narcotic, addictive, or dangerous, or that produce unpleasant side effects.

The body of research surrounding the medicinal value of marijuana is extensive. Much of it concerns THC, one of the cannabinoids in marijuana. THC is what causes people to feel "high" and also what gives cannabis some of its medicinal properties, such as increased appetite. The human body produces endocannabinoids, its own natural version of cannabinoids. Studies show that the endocannabinoid system helps to regulate the body's responses "to a variety of stimuli" [source: Nature]. The body will produce endocannabinoids when needed, but sometimes the effect is very brief. Endocannabinoid receptors are found throughout the body but are especially prominent in the brain. The cannabinoids in marijuana, like THC, bind to these receptors, producing various effects, some medicinal, such as reducing pain or anxiety, but also the feeling of being high. Besides the aforementioned medical uses, research has shown that cannabinoids slow the development of certain cancers [source: Armentano­].

­One popular strain of research examines how to extract the medical benefits of cannabis without producing intoxication. One such medication already exists: the pain reliever Sativex, based on a natural extract of marijuana and administered as an oral spray.

Then there is Marinol, which the DEA describes as the already existing, legal form of medical marijuana [source: DEA]. Approved by the FDA and used for treatment of nausea in cancer and AIDS patients, Marinol is a pill containing a synthetic form of THC. The DEA says that the legal use of Marinol is analogous to morphine being a legal, safe alternative to smoking opium or heroin [source: DEA]. (Morphine is one of many approved medicines extracted from opium.)

But some experts consider Marinol and other synthetic substitutes to be less effective -- and more expensive -- than marijuana. Medical marijuana advocates say that Marinol is a less complete version of marijuana, lacking some of the compounds that make marijuana medically beneficial [source: NORML]. Smoking herbal marijuana provides patients with a faster acting medication, one whose dosage they can easily regulate. Marinol may also be more psychoactive than traditional cannabis and present its own set of side effects [source: NORML].

On the next page, we'll take a look at the legal issues surrounding medical marijuana.