Browse the article How to Become an Army Air Traffic Controller 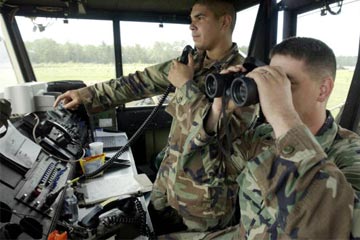 Remember that kind lady with the orange vest and white gloves who with a smile, a flurry of waving gestures and a few toots of a whistle would demand that cars make way for you and your friends crossing the street on your way to and from school? Air traffic controllers (ATCs) are the crossing guards of the friendly (and sometimes not so friendly) skies. They coordinate the movement of air traffic -- including large commercial flights, private jets and military aircraft -- to make certain that helicopters and planes stay a safe distance apart. Some ATCs guide air traffic crisscrossing the country through designated airspaces using radar and satellite technology; others regulate airport arrivals and departures from a control tower by visually directing the aircraft to specific locations, as well as by using radar and satellites. Safety is an air traffic controller's immediate concern, but ATCs also direct planes efficiently to get people where they need to be and to minimize delays.

The majority of ATCs in America -- more than 26,000 according to the U.S. Bureau of Labor Statistics -- are civil employees who work for the Federal Aviation Administration (FAA). There are essentially two types of FAA air traffic controllers; one directs takeoffs and landings at airports, and these ATCs usually work out of airport control towers. The other type of ATC helps guide a plane once it has left the airport, and these ATCs work out of 22 "en route" traffic centers that control air traffic between destinations throughout the country [source: FAA].

Many ATCs also serve in the various branches of the military, including the U.S. Army, which in exchange for service provides the training necessary for a career in air traffic control both in and out of the military. These ATCs are soldiers first and foremost, serving their country by tracking planes and giving landing and takeoff instructions at air traffic control facilities around the world.

Whether guiding the planes that move citizens across the country or military aircraft carrying the country's enlisted men and women, the job of an air traffic controller requires specialized skills that draw on computation ability and require quick decision making. Up next, we'll tell you how to get started in this demanding and rewarding career.

Every day, FAA air traffic controllers direct the flow of the more than 50,000 aircraft that enter the United States' National Airspace System. These air traffic controllers work at airports and control centers around the country and are employed by the federal government. The job requires strong computational skills, poise under pressure and quick decision-making ability. And the good news is that the FAA is hiring: Between 2007 and 2017, the government plans to hire and train nearly 17,000 new air traffic controllers [source: FAA].

In addition to hiring professionally experienced ATCs such as military veterans, the FAA also recruits people with no prior air traffic control experience, as well as graduates of the Air Traffic Collegiate Training Initiative Program, through which the FAA partners with colleges and universities teaching basic courses in air traffic control. Generally, a person without professional air traffic control experience must be younger than age 31 and pass a basic medical examination, background check and pre-employment test called Air Traffic Selection and Training (AT-SAT). The AT-SAT is an eight-hour, computer-based exam that tests skills such as reasoning, numeric ability and movement detection [source: FAA].

To become an Army ATC, a person must first enlist in the Army or Army Reserve; to enlist, a person must be a U.S. citizen or resident alien between the ages of 17 and 41 and usually (but not always) must have a high school diploma. The person must also be generally healthy, in good physical condition and in "good moral standing." After enlisting, a soldier who wants to become an ATC must meet the Army's Class 4 medical fitness standards, have normal color vision, be able to frequently lift more than 50 pounds (23 kilograms), occasionally lift more than 100 pounds (45 kilograms) and pass a technical aptitude test [sources: U.S. Army, U.S. Army Info].

On the next page, learn about the training to become an Army air traffic controller. 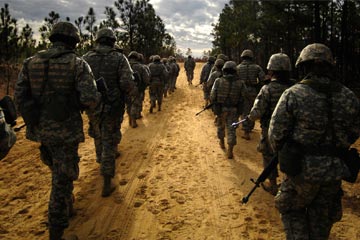 Because Army air traffic controllers are soldiers above all else, basic combat training, including marching, occurs before any specialized training.
Photo Courtesy of U.S. Army

Civilian ATC applicants who do not have professional air traffic control training experience undergo paid training (if offered employment by the FAA) at the FAA Academy in Oklahoma City, Okla. The Academy offers training in both terminal operation -- managing the takeoff and landing of planes at airports -- and en route air traffic control. Training includes classroom instruction and simulated exercises. Courses run about eight and a half hours a day for a number of weeks, depending on the program [source: FAA].

While Army ATCs are charged with managing the flow of air traffic, they nevertheless remain soldiers at all times. On its Web site, the Army cautions recruits' parents that "a soldier's job comes with a certain level of risk...some soldiers are asked to serve in dangerous situations." Many ATCs work in the theater of war, controlling air traffic in places such as Afghanistan and Iraq, and they are trained to perform their duties under combat conditions [source: U.S. Army].

If becoming an Army air traffic controller interests you, the next page offers a few tips to help make your interest a reality. 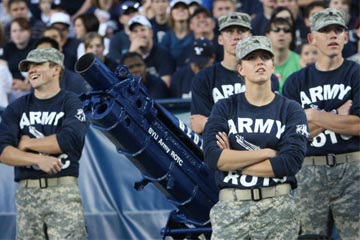 If you're a college student considering a career as an Army air traffic controller, ROTC can be very beneficial to you.
Melissa Majchrzak/Getty Images

The U.S. Army's air traffic controller program gives people the opportunity to serve in the military while developing the skills and experience necessary to become an ATC both in uniform and as civilian. It's no surprise the program is competitive, so here are a few tips for becoming an Army air traffic controller.

Not all soldiers become air traffic controllers, but for those who do, the opportunity comes with great responsibility. ATCs are tasked with keeping the skies safe for both military personnel and the hundreds of thousands of people who fly each day. Learn more about air traffic control and life in the U.S. Army by checking out the links on the next page.