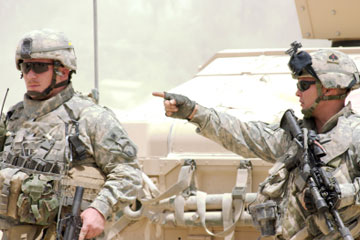 What does it take to get a position translating for the U.S. Army?
©iStockphoto.com/RockFinder

On the afternoon of April 9, 1865, General Ulysses S. Grant arrived at a small courthouse to meet with Robert E. Lee, the commander of the Army of Northern Virginia, a force Grant had ruthlessly pursued for months. After four years of war, Lee's army was hungry, tired and sick, and the 58-year-old Lee had come to Grant to bring their fight to an end. The two commanders had a quick chat about a time they met each other in Mexico, politely negotiated the terms of surrender, signed an agreement, and then waved each other off. The whole thing was over in just a couple hours.

Surrenders can be much easier when both sides speak the same language. Of course, the American Civil War was one of the last major conflicts where the United States would have the convenience of battling an opponent who spoke English. From World War I to Vietnam, to the United State's current conflicts in Iraq and Afghanistan, the U.S. military has rarely been able to fire a shot without bringing along bilingual soldiers. This was clear most recently when, in the months leading up to the U.S. invasion of Iraq, the U.S. Army began enlisting speakers of Arabic, one of the country's primary languages.

Any U.S. soldier entering a foreign country is usually provided with a list of common phrases to help them if he or she encounters locals or surrendering troops. For instance, during World War II, every U.S. soldier storming French beaches on D-Day carried a book of basic French phrases.

However, a phrasebook can only go so far when it comes to translating enemy communications or asking for help from local people. That's where the role of an Army translator is paramount.

But language isn't like most other military skills. Almost anyone, with the proper training, can drive a tank, shoot a rifle and guard a checkpoint, but learning a new language takes years. A translator once said that it's easier to teach someone to fly a fighter jet than it is to teach him a new language [source: Associated Press]. The Army can train soldiers, but it has to find translators.

So what kind of languages is the U.S. Army looking to translate? Spanish? Swahili? Esperanto? Read on to find out.