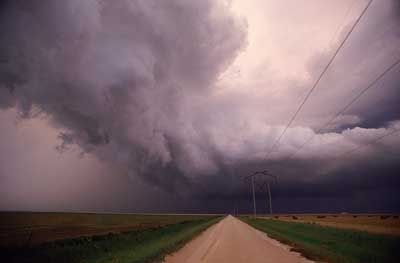 Clusters of water droplets (called cloud droplets) and crystallized frozen water (called ice crystals or snow crystals) form clouds. A cloud can contain both of these, depending on its temperature. For instance, a cloud's top may be cooler than the lower regions, creating a mix of liquid and frozen water.

That being said, snow happens a lot like rain. As snow crystals condense and clump together, snowflakes form. When they reach the point where they're too heavy to remain aloft, they fall together as snow. Different surrounding temperatures affect what type of snowflakes will develop. Sometimes on the way down, snowflakes melt into rain; other times they fall intact.

A photograph of a snowflake, taken with a special photomicroscope.
Photo courtesy Kenneth G. Libbrecht and SnowCrystals.com

You may be asking, "If water droplets and snow crystals make up clouds, how do we get hail, sleet and freezing rain?" The answer is that once cloud droplets and ice crystals condense and reach critical falling mass, a few additional processes can occur.

Besides precipitation, do clouds serve any other purpose? Clouds have several other important functions that benefit life on Earth. Read about these benefits on the next page.