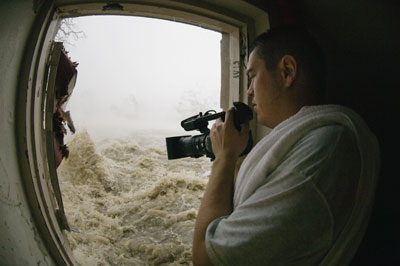 Tornadoes and hurricanes are the most dangerous storms nature can throw at us. They can destroy entire buildings and cause thousands of injuries or deaths. Most people who live in areas susceptible to these storms keep a close eye on weather reports and take cover or evacuate when one is on the way. Storm chasers keep an even closer eye on weather data, but for a different reason. When a tornado or hurricane happens, they want to be there to observe and record it.

­There are some really good reasons for chasing storms -- mainly, scientific research, though a few people make a living selling photographs or footage of storms. There are also several reasons why amateurs shouldn't go storm chasing, no matter how fun it looks. For one thing, the eight to 12 hours spent driving around with no guarantee of actually seeing a tornado is anything but exciting. But also, storms are very dangerous. Professional storm chasers have meteorological training that allows them to understand the storms they're chasing. They know when conditions are safe and when it's time to back off. They also learn by chasing with other experienced storm chasers. Amateurs should never chase storms. Ever.

We're going to talk to some people who drive thousands of miles to place themselves near tornadoes, some of the deadliest storms in the world. We'll find out why they do it, how they do it and what we can learn from their experiences.