The Triangle of Life Myth 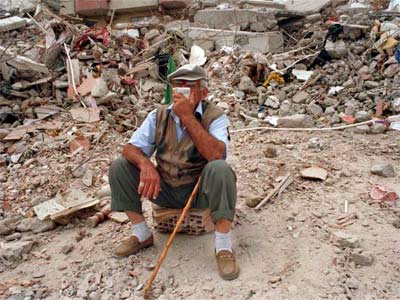 Some of Doug Copp's supposed expertise comes from responding to an earthquake in Turkey, which has vastly different (and less rigorous) building codes than those of the United States.
Ami Vitale/Getty Images

Doug Copp has become famous in some circles for his Triangle of Life earthquake-survival method. You may have received a chain e-mail containing an essay from him in which he trumpets his credentials and claims that the "duck and cover" method almost always leads to unnecessary deaths. He also challenges the conventional wisdom that doorways are dangerous.

According to Copp's method, objects like sofas, beds, desks and other furniture get crushed or become compressed when a building or roof collapses. But next to them is a "void" (often in a triangular shape) that he claims is a safe place in which to seek cover, ideally in the fetal position. He even says that large stacks of paper produce voids.

Unfortunately, while Copp's survival tips are found all over the Internet, a lot of controversy goes along with them. Snopes.com, the popular site for debunking rumors and urban legends, has found several problems with Copp's advice [source: Snopes]. The site points out that many of Copp's claims have been debunked on scientific grounds or shown to be inaccurate because they come from experiences in other countries with different building codes. He has also been shown to have distorted and selectively used evidence to prove his points [source: Petal].

The U.S. Department of Justice launched a fraud investigation because Copp received $649,000 from the 9/11 victims fund yet apparently did little or no rescue work and did not suffer the serious injuries he claimed. In addition, the chief of special operations for the New York Fire Department called Copp "a bald-faced liar" [source: Linthicum].

Besides these issues, an in-depth investigation by an Albuquerque newspaper (where Copp used to live) uncovered several other incidents in which Copp had lied about or fabricated his credentials, including his supposed "body detector" machine, which was, in fact, a readily available, commercially purchased gas detector [source: Linthicum].

Much of Copp's advice seems to be derived either from limited experience or by seeing results -- such as that people survive in voids -- and making general assumptions as to the cause, assumptions that he can't back up with scientific testing. One of his few claims that experts have supported is that it is a good idea to avoid the stairs during an earthquake [source: Petal].