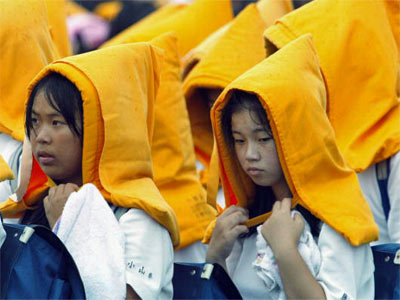 School children participate in a disaster drill in 2004 in Japan. The drills, involving some 2 million people, are held every Sept. 1 on the anniversary of the massive 1923 earthquake that killed more than 140,000 people in the Tokyo area.
Koichi Kamoshida/Getty Images

It's impossible for a building to be considered "earthquake proof." Earthquakes vary in type, location and magnitude, and even some of the best retrofitting may not stand up to an overwhelmingly powerful earthquake (say, an 8.5). Even so, you can take measures to secure a building before an earthquake and to prevent potentially dangerous complications afterward. It starts with making sure your house doesn't move from its foundation during the earthquake's resulting ground motion.

A seismic retrofit generally involves bolting the house to the foundation -- if it's not already. Plywood is used to brace the walls, which in turn are attached to structural supports known as floor framing. The foundation itself might need some work. For example, an expert might recommend that an old brick foundation be replaced or "capped" with concrete [source: Burnett]. These efforts, when done properly, can help to shift the earthquake's force. Instead of damaging the structure of the house or knocking it off its foundation, the foundation itself absorbs the brunt of the shaking.

Usually the actual shaking of the quake tends to do the most damage to buildings. The distance from the epicenter and the magnitude determine how much damage might be caused, but the type of soil and construction of the house are important as well. A weak foundation on top of soft, sandy soil poses more hazards than a firm foundation on solid bedrock. In addition to shaking, earthquakes may also bring with them fire, water leaks and other aftereffects.

Retrofitting can costs tens of thousands of dollars, though it may be much less. Some contractors specialize in retrofitting, but a structural engineer may be needed.

Besides securing the foundation and structure, individual items should also be considered. Large pieces of furniture, particularly those that are taller than they are wide, should be bolted to the wall. Store breakable items on low shelves or in cabinets than can be secured shut. Be careful of placing pictures or other items that could fall over beds. Finally, make sure you have a working fire extinguisher.

During the retrofitting process, it's a good time to identify places that will be safe during a quake, though we'll discuss this topic more later. Also keep in mind that emergency instructions (such as for shutting off gas) should be handy, and make sure you have a pair of good shoes, a flashlight and warm clothing readily accessible.

Make a plan to communicate or rendezvous with family members in case you aren't together when an earthquake occurs. Keep in mind that cell phone service may be interrupted.