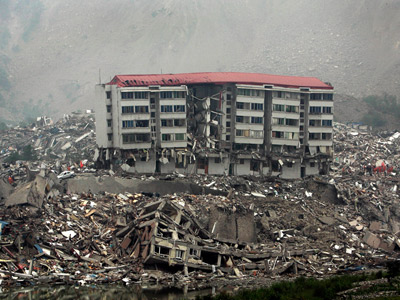 ­In May 2008, one of the deadliest earthquakes in history struck Sichuan Province in western China. It registered 7.9 on the Richter scale, leaving a 185-mile (298-kilometer) crack in the Earth's crust and almost 80,000 people dead [source: LaFraniere].

In the aftermath of the disaster, attention quickly turned to a nearby dam, just 3.4 miles (5.5 kilometers) from the epicenter of the earthquake. Many scientists believe the Zipingpu Dam reservoir may have helped trigger the massive quake.­

The vibrations of the Earth's surface we call earthq­uakes are typically natural occurrences. They're most often caused by the shifting of plates of rock under the surface of the Earth. These plates move along fault lines, which are places where the otherwise solid rock of the Earth's crust has cracked. When the plates slide against each other or away from each other, the Earth vibrates violently.

Less often, earthquakes are caused by natural occurrences like volcanic eruptions. But vibrations felt at the surface of the Earth can also result from Earth-shaking, man-made events like underground bomb testing and mine collapses -- and the filling and emptying of dam reservoirs.

It's easy to see how an underground explosion can shake the Earth. But a dam? A dam is just holding back water. How can that cause an earthquake?

In this article, we'll see how a dam -- and more specifically its reservoir activity -- can trigger a quake, and we'll find out whether dams have caused earthquakes and other "natural" disasters in the past.

­Most of us accept that our actions can have great effects on our natural environment. In the case of triggering earthquakes, we're talking about man's actions reaching deep underground, all the way down to the crust.