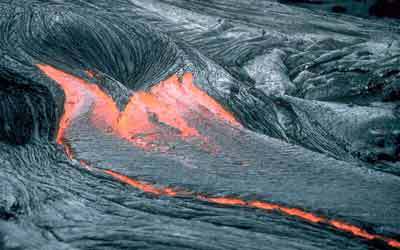 Magma can also push up under the middle of a lithosphere plate, though this is much less common than magma production around plate boundaries. This interplate volcanic activity is caused by unusually hot mantle material forming in the lower mantle and pushing up into the upper mantle. The mantle material, which forms a plume shape that is from 500 to 1000 km wide, wells up to create a hot spot under a particular point on the earth. Because of the unusual heat of this mantle material, it melts, forming magma just under the earth's crust. The hot spot itself is stationary; but as a continental plate moves over the spot, the magma will create a string of volcanoes, which die out once they move past the hot spot. The Hawaii volcanoes were created by such a hot spot, which appears to be at least 70 million years old.

So what happens to the magma formed by these processes? We saw that the magma produced at ocean ridges just hardens to form new crust material, and so doesn't produce spewing land volcanoes. There are a few continental ridge areas, where the magma does spew out onto land; but most land volcanoes are produced by subduction zone volcanism and hot spot volcanism.

The magma keeps moving through the crust unless its upward pressure is exceeded by the downward pressure of the surrounding solid rock. At this point, the magma collects in magma chambers below the surface of the earth. If the magma pressure rises to a high enough level, or a crack opens up in the crust, the molten rock will spew out at the earth's surface.

If this happens, the flowing magma (now called lava) forms a volcano. The structure of the volcano, and the intensity of the volcanic eruption, is dependent on a number of factors, primarily the composition of the magma. In the next section, we'll look at some different magma types and see how they erupt.