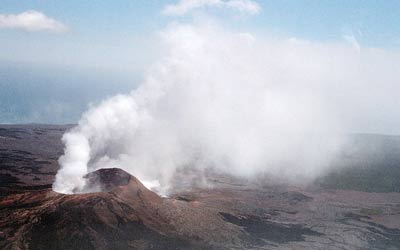 Volcanoes vary a great deal in their destructive power. Some volcanoes explode violently, destroying everything in a mile radius within minutes, while other volcanoes seep out lava so slowly that you can safely walk all around them. The severity of the eruption depends mostly on the composition of the magma.

The first question to address is: why does the magma erupt at all? The erupting force generally comes from internal gas pressure. The material that forms magma contains a lot of dissolved gases -- gases that have been suspended in the magma solution. The gases are kept in this dissolved state as long as the confining pressure of the surrounding rock is greater than the vapor pressure of the gas. When this balance shifts and vapor pressure becomes greater than the confining pressure, the dissolved gas is allowed to expand, and forms small gas bubbles, called vesicles, in the magma. This happens if one of two things occurs:

In either case, what you get is magma filled with tiny gas bubbles, which have a much lower density than the surrounding magma, and so push out to escape. This is the same thing that happens when you open a bottle of soda, particularly after shaking it up. When you decompress the soda (by opening the bottle), the tiny gas bubbles push out and escape. If you shake the bottle up first, the bubbles are all mixed up in the soda so they push a lot of the soda out with them. This is true for volcanoes as well. As the bubbles escape, they push the magma out, causing a spewing eruption.

The nature of this eruption depends mainly on the gas content and the viscosity of the magma material. Viscosity is just the ability to resist flow -- essentially, it is the opposite of fluidity. If the magma has a high viscosity, meaning it resists flow very well, the gas bubbles will have a hard time escaping from the magma, and so will push more material up, causing a bigger eruption. If the magma has a lower viscosity, the gas bubbles will be able to escape from the magma more easily, so the lava won't erupt as violently.

Of course, this is balanced with gas content -- if the magma contains more gas bubbles, it will erupt more violently, and if it contains less gas, it will erupt more calmly. Both factors are determined by the composition of the magma. Generally, viscosity is determined by the proportion of silicon in the magma, because of the metal's reaction to oxygen, an element found in most magmas. Gas content varies depending on what sort of material melted to form the magma.

If the viscosity and the gas pressure are low enough, lava will flow slowly onto the earth's surface when the volcano erupts, with minimal explosion. While these effusive lava flows can reap considerable damage on wildlife and manmade structures, they are not particularly dangerous to people because they move so slowly -- you have plenty of time to get out of the way.

If there is a good ­deal of pressure, however, a volcano will begin its­ eruption with an explosive launch of material into the air. Typically, this eruption column is composed of hot gas, ash and pyroclastic rocks -- volcanic material in solid form. There are many sorts of explosive eruptions, varying significantly in size, shape and duration.