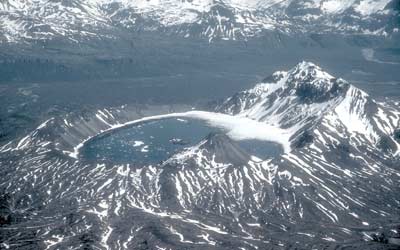 The caldera at Kaguyak Volcano, in Alaska, is about 1.5 miles (2.5 km) in diameter.
Photo courtesy USGS

Volcanic activity can also produce other interesting structures, such as calderas and lava domes. Calderas, large crater-shaped basins, form when eruptions drain a magma chamber and the volcano edifice collapses into the empty space. These often fill up with water, creating round lakes, such as Crater Lake in Oregon. Lava domes form when most of the gas vesicles escape during an initial eruption, and the remaining viscous lava lacks the necessary pressure to spew out and so it flows out very slowly at the summit crater. This creates a domed plug at the top of the volcano, which may continue to grow over time.

There are a startling number of volcanoes on earth -- more than 500 "active" volcanoes in the world, about as many "dormant" volcanoes, and many volcanoes that have been deemed "extinct." As it turns out, these determinations are largely based on subjective interpretation or somewhat arbitrary standards. The traditional criteria for this determination was the date of the last eruption. If the last eruption fell within historic times -- the period people have been recording history -- the volcano was deemed active. If the last eruption occurred before historic times but within 10,000 years, the volcano was considered "dormant" because it likely had the potential to erupt again. Volcanoes that had not erupted in more than 10,000 years were considered extinct, because it seemed unlikely they would erupt again.

A 1990 eruption of Redoubt Volcano in Alaska.
Photo courtesy USGS

This is certainly an inexact standard. For one thing, "historic times" is fairly vague, and varies from culture to culture. Additionally, different volcano types have widely varying eruption frequencies. Scientists generally use a more sensible criteria these days, though it's based mostly on subjective assessment. If the volcano is erupting or demonstrating activity in the form of earthquakes or gaseous emissions, it is considered active. If the volcano is not showing any signs of activity, but has erupted within the last 10,000 years and has the potential to erupt again, it is considered dormant. If it has not erupted in 10,000 years or has clearly exhausted any magma supply, the volcano is considered extinct.

Of the 500 or so active volcanoes, around 10 are erupting on any given day. For the most part, these eruptions are small and well-contained, so they don't threaten life and limb. From time to time, however, we get a major eruption that either takes lives or, more often, devours property. And while not as catastrophic as life-threatening eruptions, these destructive events can certainly take a heavy financial toll on the victims.

There have been, in recorded history, dozens of extremely catastrophic volcanic eruptions -- one may even have wiped out an entire civilization. In fact, in just the last 200 years there have been 19 eruptions that have killed more than 1,000 people. Volcanic activity has certainly played a significant and destructive role in our history, and will continue to do so in the future.

This is only half the story, however. As destructive as it is, volcanic activity is one of the most important, constructive geological processes on Earth. After all, as we saw when we looked at plate tectonics, volcanoes are constantly rebuilding the ocean floor. As with most natural forces, volcanoes have a dual nature. They can wreak horrible devastation, but they are also a crucial element of the earth's ongoing regeneration. They are certainly one of the most amazing, awe-inspiring phenomena on the planet.