How well do no-fly zones work? 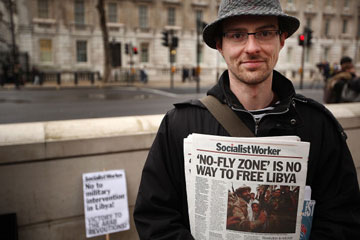 A man sells copies of The Socialist Worker newspaper in London, as demonstrators protest against British involvement in a no-fly operation over Libya in 2011.
Peter Macdiarmid/Getty Images

Experts say that enforcing the Libyan flight ban over an extended period is likely to be a major challenge for NATO, since Libya covers 680,000 square miles (1,761,191 square kilometers). On the plus side, most of the population lives on 10 percent of the land, in a narrow region along the coast [source: France24]. A March 2011 analysis by the Center for Strategic and Budgetary Assessments estimated the cost of imposing a no-fly zone over the entire country for a six-month period at $3.1 billion to $8.8 billion [source: Harrison and Cooper].

Additionally, no-fly zones necessitate risks to NATO pilots. In Bosnia in 1995, U.S. Air Force Capt. Scott O'Grady's F-16 was hit by a surface-to-air missile. Grady was forced to eject and parachute into Serbian-held territory. Relying upon his survival training, he spent six harrowing days evading Bosnian Serb pursuers, eating ants and catching rain in a plastic bag for drinking water. Fortunately, he was able to establish radio contact with a U.S. search plane, and eventually was rescued by a team of Marines [source: Fedarko].

In Iraq, Saddam Hussein reportedly offered a $14,000 reward in the late 1990s to anyone who could shoot down a coalition aircraft, but fortunately no one ever was able to collect [source: McGeary]. Even in Libya, where anti-aircraft defenses have been destroyed, NATO airplanes are still vulnerable to a lucky shot from shoulder-fired missiles. According to a Russian wire-service report, Gaddafi reportedly possesses 600 to 1,500 such weapons, and has been handing them out to supporters [source: RIA Novosti].

Critics of no-fly zones also question whether they actually achieve their intended purpose of preventing despotic regimes from killing their own people. In Bosnia, for example, the no-fly zone failed to prevent Bosnian Serb forces from laying siege to Srebrenica and massacring 7,000 Bosnian Muslim men and boys there in 1995 [source: BBC News]. Additionally, in Libya, it remains unclear how effective the no-fly zone will be in deterring Libyan dictator Gaddafi from suppressing the rebellion. The regime's ground forces -- tanks, artillery and foreign mercenaries -- are still vastly superior in might to the largely untrained, poorly armed and disorganized opposition [source: England and Green]. As a result, some have criticized the no-fly zone as a halfway measure, and argued that the only way to prevent a slaughter is for the United States and its allies to invade Libya with ground forces and overthrow Gaddafi. But President Obama, in a March 2011 speech, nixed the military regime-change option, in part because it would exceed the U.N. mandate and would risk too many American lives. Additionally, such a move probably would not be supported by neighboring countries [source: Politico].

So for now, a no-fly zone will have to do.