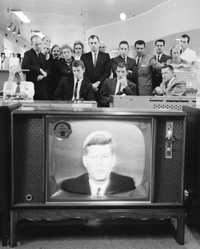 A group of customers in an unidentified store gathers to watch President John F. Kennedy address the nation on the subject of the Cuban Missile Crisis, Oct. 22, 1962.
Ralph Crane/Time Life Pictures/Getty Images

­The fi­rst half of the 1960s turned out to be one of the most trying eras of the nuclear arms race. Between 1960 and 1964, both France and China joined the nuclear weapons "club" by testing their own designs. The Soviets tested the most powerful bomb ever exploded, a 58-megaton atmospheric hydrogen ­bomb. As President Dwight Eisenhower left office, he warned the nation about the dangers of the military-industrial complex, a broad term that described the large network of individuals and institutions working on weapons and military technology. A growing awareness of tensions between nations, especially the United States and Russia, was only adding more heat to the Cold War. At one point, Americans were even encouraged by President Kennedy to build or buy their very own bomb shelters to avoid the dangers of a nuclear attack. People listened, and a year-long frenzy of shelter construction consumed many Americans.

One of the first major scares of the race began with the failed Bay of Pigs invasion in Cuba in April 1961. New president John F. Kennedy had approved a CIA plan to overthrow the Cuban government and replace the country's leader, Fidel Castro, with a politically friendly, non-communist government. The CIA trained a group of Cuban exiles to invade the country, but the invasion ended quickly once bombers missed targets and the invaders were either killed or captured.

This military error embarrassed Kennedy, but it led to a much more dangerous situation. The next year on Oct. 14, a U-2 bomber flying over Cuba sighted Soviet nuclear missile sites under construction, and what is known as the Cuban Missile Crisis began. The missiles were pointed at the U.S., and a nuclear warhead could easily reach America in a short amount of time. From Oct. 16-29, the world watched as President Kennedy and Communist Party leader and Soviet premier Nikita Khrushchev nervously negotiated the removal of the missiles. The Soviets finally agreed to withdraw the weapons, but this marked the closest the world had come to nuclear war.

By this point, both the U.S. and the Soviet Union recognized the concept known as mutual assured destruction (MAD) -- if one country made a nuclear attack, chances were good the other would simply strike back, and the destruction of both nations would likely be the only outcome. This was the only thing that kept both nations from attacking each other, and as the '60s ended, more efforts were made toward slowing or stopping the nuclear arms race. The two rivals installed a "hot line" to facilitate discussion in the event of another close call. In July 1968, the Treaty on the Non-Proliferation of Nuclear Weapons was signed in Washington, D.C., Moscow and London, with the aim of preventing any nation without nuclear weapons from acquiring them. The first Strategic Arms Limitation Talks (SALT I) between the U.S. and Soviet Union also began in Helsinki, Finland, in November 1969, and the world was on its way toward a nuclear détente, a relaxing of tensions and attempt at understanding.

To learn more about détente during the 1970s, read the next page.