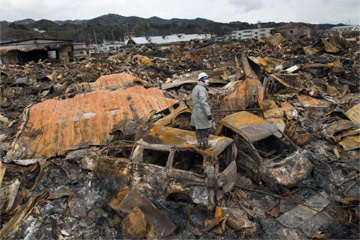 A glimpse of the aftermath from the largest earthquake in history and the ensuing tsunami that tore Japan apart and led to its nuclear catastrophe.
Paula Bronstein/Getty Images

Remember, at the heart of every nuclear reactor is a controlled environment of radioactivity and induced fission. When this environment spins out of control, the results can be catastrophic.

For many years, the Chernobyl disaster stood as a prime worst-case example of nuclear malfunction. In 1986, the Ukrainian nuclear reactor exploded, spewing 50 tons (45 metric tons) of radioactive material into the surrounding area, contaminating millions of acres of forest. The disaster forced relocation of 150,000 people, and eventually caused thousands to die from cancer and other illnesses [source: History.com].

Chernobyl was poorly designed and improperly operated. The plant required constant human attention to keep the reactor from malfunctioning. Yet even a well-designed nuclear power plant is susceptible to natural disaster.

On Friday, March 11, 2011, Japan experienced the largest earthquake in modern history. A programmed response at the country's Fukushima-Daiichi nuclear facility immediately descended on all of the reactor's control rods, shutting down all fission reactions within 10 minutes. Unfortunately, however, you can't shut down all radioactivity with the flip of a switch.

The March 2011, quake manifested a deadly tsunami, which destroyed the backup diesel generators that powered the water coolant pumps the facility had turned to after it couldn't get power from Japan's grid. These pumps circulate water through the reactor to remove decay heat. Uncirculated, both the water temperature and water pressure inside the reactor continued to rise. Furthermore, the reactor radiation began to split the water into oxygen and volatile hydrogen. The resulting hydrogen explosions breached the reactor building's steel containment panels [source: World-Nuclear.org].

Simply put, the Fukushima-Daiichi facility had many countermeasures in place to shut down operations in the event of severe seismic activity. They just didn't count on losing power to their coolant pumps.

Plants such as Japan's Fukushima-Daiichi facility, Russia's Chernobyl and the United States' Three Mile Island remain a black eye for the nuclear power industry, often overshadowing some of the environmental advantages the technology has to offer.