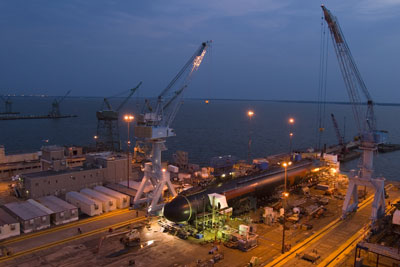 In Newport News, Va., a Virginia-class nuclear submarine is prepared for its christening. This submarine may be equipped with weaponry before its maiden voyage.
Ira Block/National Geographic/Getty Images

As the means of propelling a submarine advanced, so, too, did the weaponry. During World War I, submarines were outfitted with deck guns, enabling them to approach commercial or military vessels while surfaced. While submarines had tactics for dealing with enemy submarines and utilized anti-ship missiles, World War II marked a submarine first when a British submarine destroyed a Nazi submarine using a torpedo. This was the first time that a submarine sank a ship; during World War I, the British sank 17 German subs. The British navy further modified its capabilities for attacking enemy vessels by employing fast subs armed with multiple torpedoes and early sonar.

In 1866, the first propeller-driven torpedo was invented [source: Brittanica]. Modern torpedoes are about 9 feet (2.7 m) long, carry 100 pounds (45 k) of explosives and can travel at 40 knots through the water toward their targets. Modern mines can contain as much as 500 pounds (226 k) of explosive material and are detonated when sensors detect certain magnetic, seismic or pressure-related input.

Once armed mainly with anti-sub missiles, as well as medium-range missiles for ships or distant subs, SSNs (fast attacks) are now outfitted with tactical Tomahawk cruise missiles that are able to strike faraway land targets with pinpoint accuracy. Tomahawks can be fired in any weather condition. Tomahawks can also be outfitted with a nuclear payload, or a 1,000-pound (453 k) warhead consisting of conventional explosives as well as multiple bomblets (a small bomb that's released midair to increase casualties). These cruise missiles are designed to fly at high speeds at low altitudes and are able to follow routes chosen for their evasive or stealth qualities.

SSBNs were initially armed with Polaris ballistic nuclear-armed missiles in the 1960s. The missiles took four years to develop and were designed to be ejected from the launch tube by gas pressure. This prevented the submarine from being damaged by the launch of the missile. Once it had navigated away from the submarine, the Polaris' rocket would engage. Though not especially accurate, the Polaris enabled the U.S. Navy to launch a nuclear missile from a concealed position beneath the surface from practically anywhere in the Earth's oceans.

There were three different versions of the Polaris missiles, and the Polaris was replaced by the Poseidon in 1972. The Poseidon missile was more accurate and had a greater range. In 1979, the Navy introduced to its submarines the first of the Trident class of missiles, the Trident I (C-4). Trident missiles could travel 4,000 nautical miles and could carry multiple warheads to be aimed at different targets. They were equipped with an aerospike that projected out of the nose cone (the front, top-end of the missile -- or the point) after launch to improve the aerodynamics of the missile.

The current weapons system carried by most American nuclear submarines is the Trident II (D-5). It's 44 feet (13 m) long, weighs 130,000 pounds (58,967 k) and can carry a larger payload than any of its predecessors. Each Trident II missile costs around $30 million to produce [source: US Navy].

In decades past, the Navy outfitted some of its submarines with nuclear-armed depth charges called Subrocs. Subrocs went operational in 1965 and were decommissioned in 1992. Subrocs were launched by rocket, traveled up to 35 miles (56 k) above the water's surface and then re-entered the water with a 5-kiloton nuclear warhead. It's remarkable that nuclear submarines were not only powered by nuclear energy and armed with nuclear weapons, but also equipped to wage a nuclear attack against rival submarines.

Next, we'll examine life aboard a nuclear submarine.