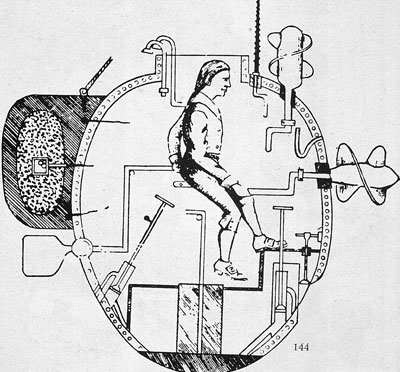 Leonardo da Vinci sketched a primitive submarine around 1515, and in 1578, William Bourne drafted the first design for a submersible craft. In 1620, the first successful submarine was built by Cornelius Drebbel and tested in the Thames River, where it completed a three-hour journey.

­American inventor David Bushnell developed the first military submarine in 1775, during the American Revolution. The Turtle was used on July 7, 1776, to sneak up on a British battleship and attach an explosive device to the hull of the enemy ship. Ultimately, the Turtle's mission failed. Designing an underwater weapon delivery system proved to be a difficult task for years to come.

­Early subs were usually propelled by hand-operated cranks, and their offensive strategies centered around covertly confronting a surface ship, attaching explosives to the enemy's hull and escaping before the explosion. Though it may sound simple, the process was quite difficult. Many submarines were simply unable to catch up to enemy warships. Attaching explosives also proved tricky since it was difficult to penetrate the ships' hulls using screw-type devices.

By the War of 1812, a submarine similar to the Turtle had almost perfected this part. It was able to screw an appendage (a vertically aligned large screw to which a rope connected an explosive) into the hull of a British warship. But the screw dislodged, separating the torpedo from its intended target.

If able to catch up to an enemy ship and attach explosives to it, escaping proved just as difficult. The crew of the H.L. Hunley, a submarine used by the Confederacy during the Civil War, discovered this. The H.L. Hunley used a long spar, or arm, to hold and release an explosive charge, successfully sinking the USS Housatonic. However, the H.L. Hunley also fell victim to the ­explosion, and its entire crew died on Feb. 17, 1864.

On the next page, read about the other developments in submarine design that emerged later in the 19th century.­

The H.L. Hunley was actually the Confederacy's third submarine, following two that sank without loss of life. Before sinking the Union boat (and itself in the process), the H.L. Hunley sank on several occasions, leading to the deaths of many crewmembers, including that of its namesake, Horace L. Hunley, an original investor and designer of the Confederate submarine project.