Life on a Nuclear Submarine 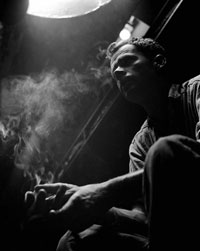 Life aboard a nuclear submarine isn't for everyone -- a sailor must undergo a battery of tests to determine his physical and mental abilities as well as his psychological and emotional well-being.

After passing early entry tests, a submariner receives formal training for about two months. He learns about the history of submarines, the different classes and types of submarines, engineering aspects, submarine weaponry, damage control measures (such as fire fighting) and team dynamics aboard the vessel.

­Depl­oyments on a submarine can vary in length, depending on the type of submarine. Overall assignments last three years. On a ballistic missile sub, two full crews rotate shifts to allow the vessel to remain at sea as often as possible. Each crew may serve for about 60 to 80 days before resurfacing and rotating out. This schedule is established for the entire three-year submarine assignment, allowing sailors and their families to plan their lives around the deployments.

Crews serving on fast attacks have more erratic mission assignments. A surveillance mission may last a few weeks -- or six months. Today, sailors can use e-mail (with some restrictions), but in times past, sailors weren't allowed to communicate with the outside world while aboard their sub.

A new submariner is called, without affection, a "puke" by the other sailors. Seasoned sailors know the boat inside and out and have already become qualified submariners, a process known as earning one's dolphins. This insignia is a badge of responsibility, brotherhood and honor. While a sailor who has already earned his dolphins may choose to relax or read in his off time, a puke must constantly study the ship's systems and pass a test on each one. Although a torpedo man or administrative officer won't need to know how to operate the nuclear reactor or the navigational systems, both will be trained to understand the systems, their safeguards and emergency procedures. Once a puke has been tested on every part of the ship by a qualified submariner, he earns his dolphins in a special ceremony and is accepted as a member of the nuclear family.

But drilling doesn't end once a sailor gets his dolphins. The crew constantly trains to handle various casualties, such as fire or flood. In addition to keeping the crew ready for any emergency, these drills also help shipmates pass the time. A submarine "day" lasts 18 hours and is split into three six-hour shifts. So a submariner may work for six hours and train, maintain equipment or sleep for 12 hours.

Bunks are generally stacked three high. Space is at a premium in a submarine, and little of it is afforded to each sailor. Some submariners may have to hot-bunk -- get into a bunk that has just been vacated by a shipmate starting his shift. A curtain provides privacy, and a small locker or drop-down shelf is all each submariner has for storage.

In addition to many safeguards in place within and around the nuclear warheads and the reactor, submariners are monitored for radiation exposure or sickness. Nuclear safety is taken very seriously -- public relations and recruitment would be considerably more difficult if submariners were ending their two-month deployment at sea without hair, teeth or white blood cells.

There are currently no women on any United States nuclear submarine. The reason for this is twofold: There's no privacy whatsoever, and reconfiguring submarines to facilitate the cohabitation of both sexes would cost a good deal of money and take space away from other submarine functions.

Continue reading to learn about other uses of nuclear seacraft.