Nuclear Submarines in the Cold War 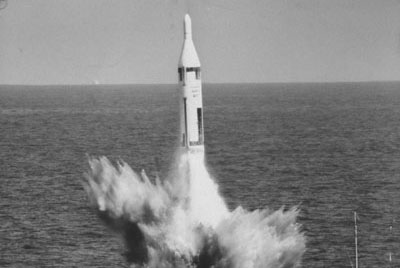 A Polaris missile is launched from a submarine in a demonstration of an advanced weapons system.
Donald Uhrbrock/Time Life Pictures/Getty Images

At the time of the Manhattan Project (before the Cold War really began), there was some talk about the possibility of using nuclear power to propel submarines. The idea of arming submarines with nuclear missiles didn't come up until the 1960 launching of the George Washington. When nuclear energy was conceived of as a power source for submarines, that was a jaw-dropper in itself. But when navies gained the ability to launch a nuclear warhead from a nuclear-powered submarine, the world had touched on what was quite arguably the most powerful -- in terms of strength and mobility -- weapons system ever.

During the Cold War, the U.S. Navy developed two different types of nuclear-powered submarines. The first was a sub that could launch nuclear missiles at other nations, called a Fleet Ballistic Missile Submarine, also known as an SSBN or "boomer." The other was an Attack Submarine, signified as SSN, or "fast attack." SSBNs are the larger of the two, up to around 560 feet (170 m) in length, while SSNs are built with speed and stealth in mind, and are around 360 feet (109 m) in length.

At least six nations now operate nuclear submarines: the U.S., Russia, India, France, China and the U.K. Several other nations, such as Brazil and Pakistan, are interested or actively attempting to develop (or purchase) nuclear-submarine capabilities. Nuclear submarines offer these nations a bit of prestige, not to mention enhanced offensive and defensive capabilities. As more nations seek to acquire this technology, navies must decide how to reconfigure their fleets (for more on this, read "Do we still need nuclear submarines?")

In the next section, we'll learn about the different parts and sections of a nuclear submarine.

The Electric Boat Company, formed in 1900 to sell the U.S. Navy designs for the first functional military submarine, also helped build the world's first nuclear submarine in 1952. It's still building nuclear submarines for the government today.