Launching a New Perfume: From Brief to Buying 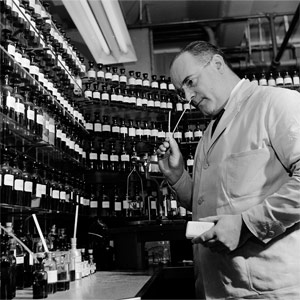 A perfumer circa 1950 with Lever Laboratories in New Jersey in the process of formulating a perfume to be added to soap.
Orlando /Three Lions/­Getty Images

­Perfume production starts with a company's plan to sell you a perfume. Let's say Gucci wants to launch a new fragrance. The company will write a description called a brief. It explains who the perfume should appeal to and why, plus what the scent should say to the smeller, such as "classy," "irreverent" or "sunrise in Thailand." It explains what forms the fragrance will take -- a light green spray and a white soap, for instance -- which helps chemists choose compatible ingredients. Finally, it explains where and for how long the products will be sold: in Europe and Asia for the next two years.

The perfumer reads the brief, thinking about what smells are in a Thai sunrise. She writes a list: lime, coconut rind, papaya and chili pepper. Next, she considers sources. Coconut rind might be in the perfume house's warehouse. If the company doesn't own the smell of fresh papaya, it will have to buy the product of someone's headspace effort, which we'll talk about in a second. The company would also need to make or buy a chemical that smells like chili pepper, since real extract would burn the nose.

­You may wonder how fragrance houses maintain their caches. They may buy ingredients from farmers then milk out the juices by steam distillation or chemical extraction. They could also buy from firms that do the legwork. But since fresh and steamed papaya emit different smells, they may use a method called headspace. A fragrance house affiliate would put a ripe Thai papaya in a jar and essentially vacuum out the smell for up to eight hours [source: Sell]. The samples would go back to the fragrance house, where a chemist would analyze the sample by GC-MS, getting a printout of the molecules in that smell. She would try to synthesize the smell from scratch.