Evolution Leading Us by the Nose? 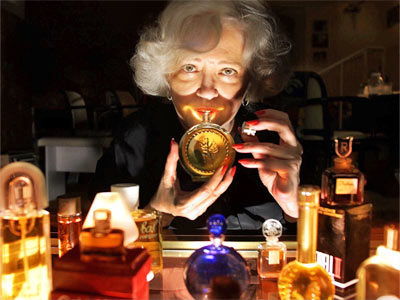 "Perfume detective" Anitra Earle smells a bottle of perfume she tracked down for a client in 2000. Earle specializes in finding discontinued perfumes or scents that are no longer imported.
AP Photo/Ted S. Warren

­To what extent are our smell preferences programmed? Here's where psychologists like Gilbert and Herz take opposite olfactory stands.

According to Gilbert, there are categories of smells that most people like and dislike. Our predispositions are explained by our evolutionary history, he says. We like fruity and floral smells because "plants make fruit aroma to attract seed dispersers," and we once ate fruit to live, says Gilbert. "The apple says, 'I smell good. Eat me. Spread my seeds all over the place.'" And we did. Flowers appeal because plants use the same building blocks to make chemicals that attract pollinators and seed dispersers, Gilbert says.

We dislike fecal, urinous, fishy and rotten odors because historically "it meant you and your primate friends were hanging around the one sleeping tree too long, and it was time to move to a clean one. There's a connection between those kind of odors and disease, bacteria, viruses." So perhaps only the ancestor who was adverse to those smells survived to pass on the alleles.

Herz, however, asserts that there are no such predispositions, at least none that cultural or personal experience can't overwrite. Infants, she points out, don't display innate scent preferences and are indifferent to the smells that adults in their culture like and dislike. Cultures also disagree on what smells bad. She points to a U.S. Army study that could not find a stink-bomb smell disliked by a range of ethnic groups [source: Herz]. Latrine smells don't bother people who grow up with them, and rotten meat was tolerated and even liked in Europe before the days of refrigeration [source: Herz]. "The reason people like any fragrance has to do with learning," she says.

­A­s a silly twist, marketing affects the choice, too. A confusing messag­e, such as a perfume pitched as romantic but smelling more like metal, can cause buyers to put down a smell they otherwise like.