Launching a New Perfume: Mixing It Up and Dousing the Public 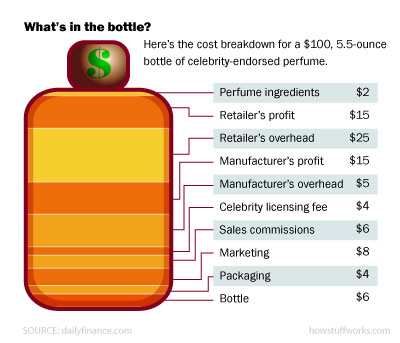 Imagine a $100 bottle of perfume. Here's what that money pays for.
© 2015 HowStuffWorks

­Once the ingredients for the proposed perfume are assembled, the next step is mixing. The perfumer writes instructions for mixing the smells in different ratios, which technicians do in company labs [source: Turin]. One version might smell mostly like coconut, while another might be heavier in chili-lime. By choosi­ng chemicals with different evaporation rates, the perfumer can control what you smell first, second and so on. Does a Thai sunrise smell like papaya, then pepper, or does the morning start out spicy?

The perfume house makes 10 to 100 versions of the perfume, which specialists smell and screen [source: Turin]. The best go to Gucci.

­Gucci smells the attempts of the fragrance houses and dismisses those it thinks have missed the point of a Thai sunrise. From the rest, it asks for modifications, perhaps liking version No. 3, but finding the coconut too sweet.

The fragrance houses rework their perfumes. They swap in ingredients that are maximally economical, long lasting and safe. They test on skin, trying to maintain the smell's shape: If the perfume smells of fruit, then spice, ghost notes of fruit should remain even as the spice is taking over. The perfume may need three chemicals for the fruit smell -- one to evaporate quickly, one to stay longer and one to hang on for dear life [source: Sell]. The perfume houses test on consumers, comparing ratings for their perfume to a top-selling perfume. The numbers and the perfume go to Gucci.

Historically, perfume formulas have been trade secrets. It's because perfumes are hard to protect. Copyrights protect only the ingredient list. A knockoff artist can simply reorder or rename the ingredients. Patents are published publicly, so imitators can read the formula, copy and slip through a loophole by changing one ratio or ingredient. Trademarks work, but so far, few companies have used them for smells [source: Gilbert].