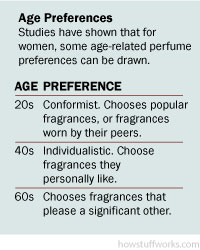 ­Why do we wear perfume at all? Men and women do it for different reasons, says Rachel Herz, a psychologist at Brown University who studies the psychology of smell and author of "The Scent of Desire: Discovering our Enigmatic Sense of Smell." Young men do it to attract women. Older men do it out of gratitude to the women who gave them the perfume.

For women, the reasons also depend on age. Women in their twenties are inspired by the media -- a singer or movie star -- and by their friends. Women in their 30s follow no particular pattern. By 40, women wear fragrance simply because they like it. And by 60, women think mostly of other people's wishes, wearing perfume because a daughter, spouse or friend likes it, according to Herz's research.

But why Chanel No. 5 and not Coco? The question of why we choose one perfume over another is complex, hotly pursued by the fragrance industry and tied up in scientific debate.

Here's what's clear: People don't like smells that are physically irritating. Chemicals like ammonia, for instance, burn when you smell them. The effect happens because the molecules activate a pain system in the face.

Although it's speculative, your choice may depend on your calibration to the intensity of certain smells, which depends on your genetically determined number of odor receptors. Odor receptors on cells in your nose grab fragrant molecules from the air. With more receptors for a class of compounds -- let's say, lily smells -- you may smell lily at a lower concentration, but at normal amounts, the smell could be intense and overwhelming. "In general, things that are high-intensity tend to be aversive," says Herz. "You may love a certain symphony, but if someone plays it really loud, it will be unpleasant."

­Having few receptors for an odor could also foul your opinion of a perfume. Cilantro's fragrance consists of many odors. If your genetic code spells out a variation that reduces your number of receptors for an odor, you may miss one of cilantro's odors, and it may smell soapy and foul, says Gilbert. With a different genetic variation and the average number of receptors, cilantro may smell herbal and refreshing. "It's like color filters on a lens," says Gilbert.