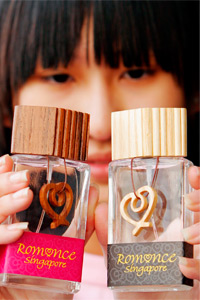 A woman holds "Romance Singapore Eau de Parfum" in 2004. The perfumes, aimed at getting Singaporeans in the mood, were used in a campaign to boost the republic's declining birth rate.
­AP Photo/Ed Wray

­If your favorite perfume reminds you of your mother, you're not alone. "Women often wear fragrances within the same categories as their mothers did," says Herz. "This tends to be because of the positive association, and because smelling someone's perfume is an evocative cue for being brought back to that person."

And if you wear perfume to make others remember you, you and some companies think alike. Westin Hotels, for instance, fans­ white tea smells into the lobby, hoping you'll remember this dimension of its logo [source: Westin].

Can a perfume change your mood? There's no scientific research on perfumes, but studies have examined individual smells. Gilbert points to a study in which pleasant food smells seemed to make people nicer. In a mall, an actor dropped a pen or asked for change either near Cinnabon, a cinnamon roll retailer, or out of smelling range. "With the Cinnabon odors in the air, people around the area were more helpful to strangers and in a better mood. The effects are small and brief, but they're real," says Gilbert.

The claim that perfume can boost your sex appeal certainly makes money for the fragrance industry. "There is absolutely no evidence that there are aphrodisiac compounds out there," says Herz. However, if you believe that your perfume makes you more attractive, you're more likely to behave confidently or flirtatiously, which could make you seem more appealing, she adds.

We do judge potential mates based on smell -- often, on body odors that we can't control. "People tend to mate nonrandomly, picking people who have different genes for the immune system," specifically the major histocompatibility complex, says Gilbert. "The inference is that we're doing it based on a smell. No one has identified the molecule that is the product of this immune gene. People might not even be aware [of the smell]."

This hasn't stopped the marketing of purported "pheromone perfumes" that claim to contain come-hither ingredients, like steroid derivates. What these do for the wearer and smeller isn't clear.

"In cases where mating pheromones work, like in pigs, the animals have an accessory olfactory system, a tubelike structure in the nose called the vomeronasal organ (VNO) that is specialized for picking up these molecules, and there is a specialized set of nerves for transferring information to the brain," says Gilbert. As for a human VNO, he adds, "Some people say we have it. Some people say we don't. Others say it might be a vestigial organ like our appendix, where we have it but it doesn't work."

­"The commercial marketing relies on the assumption that our response is going to be like the pig response -- that the woman in the bar is going to start salivating all over you," says Gilbert. "Yeah, right."