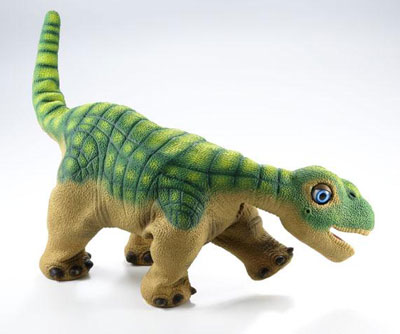 The idea for a baby dinosaur came from Caleb Chung, co-inventor of the Furby and one of the inventors behind Pleo. "[Chung had] created tons and tons of ... other kinds of products, and he had always wanted to do a dinosaur," Sosoka says. The next step was to determine the dinosaur's species. "We wanted to do a quadruped because they are more stable," Sosoka explains.

In addition to being stable, Pleo needed to be expressive. Sosoka continues:

The ability to express and interact emotionally was one of the key things we wanted to do. In order to do that, we needed to have some features in the dinosaur ... that would make it easy for people to see emotion. The one great one is a tail ... If a dog [has] a tail, you can just see, the tail goes up when they are excited, it goes down between their legs when they are scared ... [if] they are not sure then it wags really slowly, and then they decide, "Oh yeah, it's okay!" then it wags.

The tail wasn't the only reason the designers chose to create a Camarasaurus. "It has a relatively long neck. A lot of dinosaurs don't have real long necks," says Sosoka. "And then it had a fairly large head. Pleo's head is bigger ... and it's not perfectly just scaled because there is a lot of stuff to put in there ... but the combination of wanting to have the tail, have a good-sized head, a long neck, the quadruped, led us to that particular dinosaur."

There also was plenty of research material on the Camarasaurus. They were abundant in North America, so there are lots of Camarasaurus fossils, including infant and juvenile fossils. "We could see that this would be the actual size the animal would be at somewhere around two weeks old," Sosoka says. "So they come out of this big, round egg ... then of course they grow to be huge, this gigantic thing. So by choosing this and picking this size, it's the real size that one of these would be if you could have one hatch and run around your table or living room."

Once the developers decided on a species, the next step was developing a prototype. We'll look at how Pleo went from idea to reality in the next section.

Robots for home use may seem novel or even futuristic, but store-bought, programmable robots have been around for a while. For example, in the 1980s, there were robots known as Omnibot and Robie Sr. You could program these robots using a remote control -- the robots stored the programs on cassette tapes. Some of today's robots, including Robosapien and Robosapien V2, are also programmable using a remote control, but they store information on digital memory.