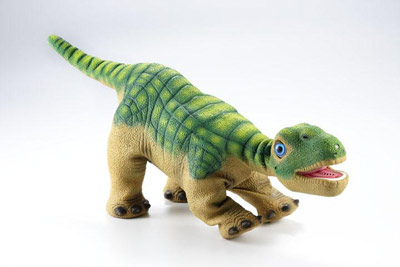 Pleo is a little more playful than a real Camarasaurus probably would have been.
Photo courtesy Ugobe

Pleo has lots of programming that controls his movements. He can also combine programmed movements to create new movements based on his environment. That way, he can appear to have an intent or a purpose for his actions and to express emotions. But these actions don't necessarily reflect what a real Camarasaurus would do. "Our goal with Pleo is not to be a model ... of that Camarasaurus, but we wanted to be as scientifically accurate as we could," says Sosoka.

So the Ugobe team worked with paleontologists, zoologists and other specialists to create a realistic foundation for Pleo's behavior while also making the dinosaur more personable and playful. "[Caleb Chung] worked with some scientists to try to understand more about this creature and how they lived and how they ... moved and ideas about what they might have sounded like and things like that." To that research, the team added the qualities people might like in a pet. "Sometimes the character is more like a dog than a dinosaur," says Sosoka, "We sprinkled in a little more character there, but wherever we could we tried to go with science and our understanding of that animal."

Whether it's acting like a dinosaur or a dog, Pleo's behavior comes from artificial intelligence. Sosoka explains. "We have a little memory, kind of like in classic AI, like a perceptron or a little neuron. And based on what happens in Pleo's world [the values in his memory] change."

These changing values allow different Pleos to behave differently, depending on their environment. Sosoka continues:

The selection of what Pleo is going to do is based on animal models taken from the field. [We can] model some of those processes digitally, and that's how we get some of the antonymous and simple learning behavior that Pleo can exhibit. So depending on what Pleo experiences, that Pleo will make different choices in how he responds to stimuli in the future. So if the Pleo ... is always being abused or if he is an environment that a lot of scary things happen, then he will become less active, it will be harder to get him excited and things like that. On the other hand, if you have a Pleo that gets played with a lot then you know when you play with him he will be much more expressive and happy ... [He might] howl or sing.

These changes to Pleo's behavior aren't necessarily permanent. As Sosoka explains, "In our design, Pleo doesn't really get to be fully grown up. He starts really young, where he can barely know where you are touching him, and he starts to understand his body and then move. Pleo doesn't get past the late teenage age, so he doesn't really get that set in his ways ... he is still plastic in that way. He is still able to change."

Along with Pleo's sounds, which are played through two speakers in his body, these movements help Pleo convey the appearance of emotions, from hunger to joy. Next, we'll look at some of the specifics of getting Pleo to move expressively.