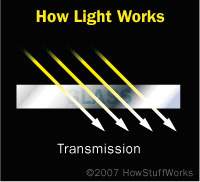 Glass, of course, falls into this last category. Photons pass through the material because they don't have sufficient energy to excite a glass electron to a higher energy level. Physicists sometimes talk about this in terms of band theory, which says energy levels exist together in regions known as energy bands. In between these bands are regions, known as band gaps, where energy levels for electrons don't exist at all. Some materials have larger band gaps than others. Glass is one of those materials, which means its electrons require much more energy before they can skip from one energy band to another and back again. Photons of visible light -- light with wavelengths of 400 to 700 nanometers, corresponding to the colors violet, indigo, blue, green, yellow, orange and red -- simply don't have enough energy to cause this skipping. Consequently, photons of visible light travel through glass instead of being absorbed or reflected, making glass transparent.