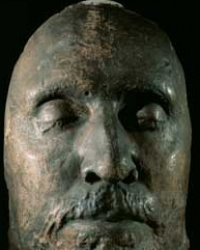 Cast faces, like this one of Oliver Cromwell, appeared in the cement flooring of Maria Gomez's home in Spain.
English School/Getty Images

This small cottage in the southern Spanish province of Jaen, in the town of Belméz, isn't haunted by ghosts, per se. The house is built, however, on burial grounds dating back to 1830 [source: Schweimler]. Inside the kitchen, the floor contains an unsolved mystery that has puzzled scientists and laymen for decades. Maria Goméz Pereira, who lived in the house, discovered a face peering up at her from her kitchen floor in 1971. Instead of a two-dimensional apparition, the face resembled a plaster casting that seemed to rise from beneath the house, as though a head was buried right below it.

Spooked by the strange façade, Pereira and her neighbors attempted to get rid of it by chipping away the cement with an axe. Yet upon doing so, they revealed more face casts, this time of older men and children. As word spread about the so-called "faces of Belméz," scientists stepped in to verify their authenticity and test whether they were paintings or fake castings orchestrated by Pereira and her neighbors. The painting theory was ruled out, but no conclusive evidence exists to pinpoint exactly how the faces got there. Nonetheless, the faces have engendered much skepticism.