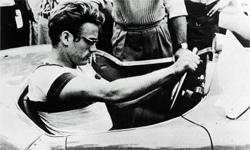 James Dean, seen here in a still from the 1957 documentary movie "The James Dean Story," had a passion for sports cars.
Photo by Warner Bros. courtesy of Getty Images

On Sept. 30, 1955, actor James Dean got into his Porsche 550 Spyder with his mechanic Rolf Wuetherich and set out for a race. On the way, Dean was involved in a deadly car crash that injured Wuetherich and killed Dean. According to legend, however, Dean's Porsche wasn't finished spreading misery. For instance, the car supposedly broke a man's legs when it rolled off its trailer during transport. The list of tragedies associated with the car grew longer every year until the car was, perhaps mercifully, lost during transport [source: Katz].

The Deane House in Alberta, Canada is the haunted house equivalent of James Dean's cursed set of wheels. And just like Dean's Porsche, the house was mobile. Built in 1906 for Superintendent Captain Richard Deane of the Mounted Police, the house was moved from its original location in 1914 to make way for the Grand Trunk Pacific Railway. Only after moving again in 1929 and becoming a boarding house, however, did the house become a magnet for tragedy. In 1933, a 14-year-old boy, suffering from epilepsy, took his own life in the house's attic after being bullied at school [source: Belanger].

Perhaps the most shocking event in the history of the Deane house, however, was the 1952 murder of Irma Umperville by her husband Roderick. Roderick stabbed and strangled his wife in front of their two children before killing himself in one of the home's apartments, adding one more tragic tale to the home's history [source: GhostStory.co.uk].

With such a violent past, it's no surprise that some say the house remains haunted today. Reports of strange sightings and unexplained laughter emanating from the foyer have surfaced for years.

One look at the name of the next house on our list and you'll immediately know why ghosts plague its residents.