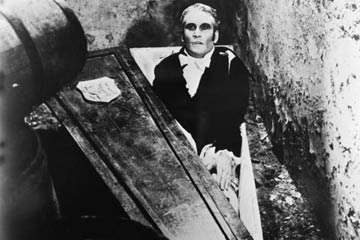 Vampires: One group for whom the comfort of coffin linings is more a practicality than a courtesy.
Stringer/Moviepix/Hulton Archive/Getty Images

Unless you work in the funeral industry, your practical interactions with coffins are, we hope, few and far between. Instead, most of us are familiar with coffins through fiction, from campfire tales to mummy and vampire movies.

Many myths claim that vampires sleep in coffins during the day to avoid sunlight. When a suspected vampire is dug up, the body is said to look lifelike, lacking the stiffness and bluish pallor of a corpse. In addition, the coffin may also be filled with blood [source: Encyclopedia of Occultism and Parapsychology].

Perhaps the most widely known vampire story is that of Count Dracula, the title character in Bram Stoker's 1897 novel, "Dracula" [source: Encyclopedia of World Biography]. "Dracula" and the myths that inspired it spawned hundreds, if not thousands, of other vampire stories, from the silent film horror film "Nosferatu" and Anne Rice's dramatic "Vampire Chronicles" novels to the spoofy "Buffy the Vampire Slayer" TV series and Stephanie Meyer's tween romance franchise, "Twilight."

As with most myths, coffin-based folklore has many of its roots in truth. One reason that these various coffin myths are so permanent -- and potent -- is that when it comes right down to it, the idea of being buried is just plain scary. And if being buried in general is that bad, being buried alive must be far worse. Learn more about this fear and how it led to a few creative coffin innovations on the next page.