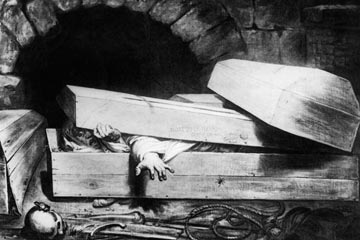 The fear of being buried alive has its own diagnosis: taphophobia. The word comes from the Greek taphos, or grave; according to the American Psychiatric Association (APA), taphophobia may result from an early traumatic experience, perhaps involving being trapped in a confined space [source: APA].

Specific phobias like taphophobia usually originate in childhood and dissipate before a person reaches adulthood, but more serious cases will last into adulthood and seldom go away without treatment. Some treatments for taphophobia include cognitive behavioral therapy, a set of psychotherapeutic techniques that emphasize the role of thought in feelings and behaviors, and exposure therapy, in which a sufferer is exposed to triggering situations in a controlled manner [sources: NACBT, APA].

Therapy is common now, but it wasn't in 18th- and 19th-century Europe, when fears of premature burial were spiking. Safety coffins, which are coffins equipped with various mechanisms to alert those above ground that a victim was trapped below, were designed to combat these fears.

Some alert mechanisms included ropes that would ring the church bell or a smaller bell mounted on the grave, a flag that could be raised from below ground, and even small, long-fused firecrackers. Some safety coffins also featured tubes through which an individual unfortunate enough to have been buried prematurely could breathe and receive food and water.

Although safety coffins captured public attention, research has shown that most would have been entirely ineffective due to mechanical faults, and it's unlikely that any were ever used for their intended purpose. However, taphophobia and related fears remain common enough that safety coffins are still available today [source: Australian Museum].