by Elizabeth Sprouse
NEXT PAGE 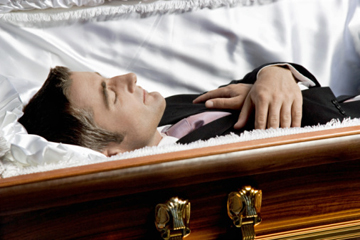 Embalming is the practice of getting a person's body ready to be buried.
Stockbyte/Thinkstock

After President Abraham Lincoln was assassinated shortly after the Civil War, he had one more trip across the country to make. However, this time was different; rather than speaking to the public, the public spoke its final farewell to him. It took 19 days for the trip from Washington, D.C. to Springfield, Ill., for Lincoln's burial. Time, though, was not an issue.

Had the procession taken place prior to the Civil War, the story would have been different. Thanks to Dr. Thomas Holmes and his use of a chemical process to temporarily preserve the bodies of the recently deceased, Lincoln, just like thousands of Civil War soldiers, was preserved and returned home for burial.

In actuality, Holmes was building on a tradition that dates back to 4000 B.C. called embalming. Embalming is the process of preparing the body for burial. The word comes from the act of applying spices and perfumed objects to minimize the smell of a decaying body; in essence, it means "to put on balm." Holmes successfully introduced the use of chemicals during the embalming process in the United States to help restore a body to its natural appearance and allow time for transport. Without this chemical process, the only other option for preservation during the mid-1860s was ice.

As such, the Union Army had embalming surgeons out in the field. Families who wanted to see their loved ones one last time would travel to the battlefields to retrieve their family members and take them home.

Today, embalming is a common practice throughout the United States, Canada and Australia [source: Seiple]. But, in this article, before we talk about modern-day embalming, we'll travel back in time to learn about the people who first practiced embalming and explore the interesting materials used by ancient cultures. Then, we'll return to discuss the modern art and science of embalming, a complicated process with known benefits, but not without controversy.