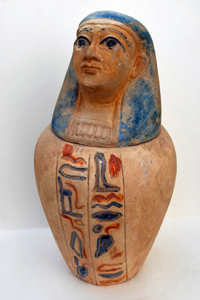 Embalming dates back to before 4000 B.C., when the ancient Egyptians wrapped the deceased in cloth and buried them in a mixture of charcoal and sand out of the reach of the Nile River. For the Egyptians, preparing the body for burial aligned with their religious faith and preparation for the afterlife.

The Egyptians believed in immortality and physical resurrection, rising after death and living again. The body needed to be in sound condition so it could attract back the soul, name, shadow and heart of the individual.

It makes sense that the Egyptians are well-known today for their successful embalming practices. After all, it is estimated that by the time they stopped using the practice in the year 700, they had embalmed 730 million people [source: Encarta].

Thanks to a thorough description by Greek historian Herodotus from around 5th century B.C., we're fortunate to have an inside look into the Egyptian embalming process, as follows:

At first, this lengthy process was reserved for members of the royal family only; however, less complicated methods of embalming were available for other people. For example, in one less-expensive procedure the body was injected with cedar oil and stored in nitre for 70 days. Then, the oil was withdrawn along with the fleshy parts of the body; only the skin and bones remained. And for the very poor, the intestines were purged and the body covered in nitre for a shorter period of time.

Although the Egyptians seemed to set the stage for embalming, they were truly just the beginning of widespread use of various embalming practices. So where did embalming spread beyond Egypt? In the next section, we'll take a look at ancient embalming across the globe and find out which cultures used honey, wax and salt in their embalming processes.