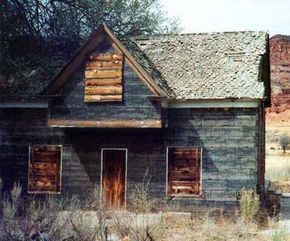 More than a third of Americans believe houses can be haunted.
Image courtesy Stock.xchng

Years ago, I stayed in a small apartment adjoining an old cabin. The property was far from ­city lights, and on clear nights, the shadows could be a little spooky. Sometimes, especially in the dark evenings of the fall and early winter, I had the uncanny sense that I wasn't alone.One night, while I was in the apartment, I heard a muffled thump that seemed to come from inside the cabin. Ordinarily, I would have dismissed the sound as the settling of the century-old building. But it was an eerily still night, and I already found the terrain around the cabin unnerving after dark. After hearing the sound several times, I started to wonder whether something supernatural was at work, but I hesitated to investigate.

­In the morning, I heard the sound again while I was outside. When I turned to see what it was, I saw an apple rolling across the grass. Testing a theory, I picked up the apple and dropped it. The sound was identical to the one that had frightened me the night before.

In daylight, looking at the fallen apples under a tree, the idea that the cabin could be haunted seemed silly. But dark nights and old buildings can cause even the most skeptical people to wonder about the existence of ghosts. According to a 2005 Gallup poll, more than a third of Americans believe that houses can be haunted, and about 32 percent believe specifically in ghosts [Source: The Gallup Poll News Service].

According to believers, a ghost is the spirit of a dead person that either has not moved on to the afterlife or has returned from it. The definition of "spirit" can vary. Some describe it as a person's soul, while others believe it is an energetic imprint that a person leaves on the world.

Humans have believed in, or been skeptical about, ghosts for thousands of years. They're even mentioned in the oldest known written work of literature, "The Epic of Gilgamesh." Ghost stories are part of most cultures' folklore, although the details vary considerably from region to region. In the next section, we'll take a closer look at ghostly encounters.

The Death of Ghosts?

Reports of ghosts bearing­ the news of deaths or disasters were frequent in the Victorian era, but they seem to be less common today. Researchers have offered a couple of possible explanations for this drop-off in supernatural messengers:­ 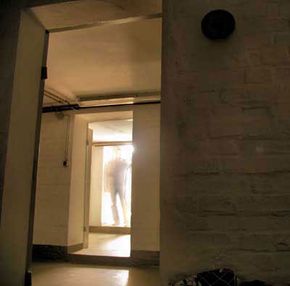 People describe ghostly encounters in lots of different ways. People see apparitions or strange lights, sense a presence in a room, hear noises or feel a sudden drop in temperature. They smell a deceased relative's favorite breakfast cooking in the kitchen or hear a favorite song playing while the stereo is off. Objects fall from shelves and doors open and close on their own. The electricity goes haywire, causing lights to flicker or televisions to turn on and off by themselves. Sometimes, people don't experience anything unusual at all, but they notice strange apparitions or shapes when they look at pictures they've taken.

Is it a ghost?

Some ghost stories involve visible apparitions that are bound to specific locations or families. These ghosts often appear as a warning that someone is going to die. They aren't always human -- some take the form of animals. Similarly, some reports of ghosts involve apparitions that inform friends or family members of recent deaths or impending crises. Some paranormal researchers classify this as a form of telepathy rather than an actual ghost.

Other ghosts are reported to be the spirits of people who died violently or suddenly; they may re-enact their deaths or try to seek vengeance. For example, some people believe that North Carolina's Brown Mountain Lights -- flickering lights that appear on the slope of the mountain -- are the spirits of Native Americans who died in battle. Sometimes, ghostly reproductions of inanimate objects, like sunken ships or crashed cars, reappear after accidents or tragedies.

Then, there are the ghosts who are simply sticking around, either unwilling or unable to leave the Earth. Paranormal researchers often refer to these ghosts as earthbound spirits. An earthbound ghost may haunt a specific location, like its home, its favorite place to visit or the place that it died. It may be trying to pass a message to friends or loved ones, to complete a task that it started while alive or to hold on to its home or possessions. Some researchers and mediums claim to be able to encourage these sprits to let go of their ties to the Earth and move on to a spiritual realm.

For a lot of people, seeing, hearing or sensing a ghost is enough to prove their existence. But researchers have found several possible explanations for the phenomena most often attributed to ghosts. We'll look at them in the next section.­­

Some paranormal researchers believe that photographs containing orbs, or unexplained spots of light, are signs of ghostly activity. Some describe orbs as a specific step in a ghost's manifestation [Source: Utah Ghost Research & Investigation]. Orbs are visible in pictures but invisible to the naked eye because the spirits react to infrared light from the automatic focus. Skeptics, however, think orbs have a physical cause, such as: 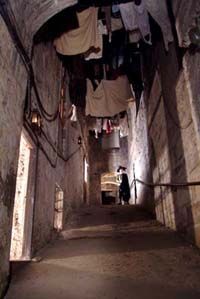 ­Richard Wiseman of the University of Hertfordshire has researched the phenomenon of haunting in Great Britain. He has studied locations considered to be haunted, like the Haunted Gallery at Hampton Court Palace, the Edinburgh Vaults and Mary King's Close. First, he has consulted written records and interviewed employees to determine exactly where in each location people have reported ghostly activity. Then, he has asked visitors to document their experiences and report anything out of the ordinary.

His results have been pretty consistent -- people report more strange experiences in the areas where others have experienced unusual phenomena in the past. In other words, people have more ghostly experiences in the places that seem to be the most haunted. This is true regardless of whether people have any prior knowledge of the area or its ghostly history. However, people who say they believe in ghosts or who already know about supernatural activity in a particular area report strange events more often.

These findings can seem to support the idea that a building can be haunted. But Weisman's projects have also involved looking for the source of the apparently paranormal phenomena. In addition to gathering reports of strange occurrences, he has evaluated physical conditions in each haunted area. He and his research team have used instruments to measure light, humidity, sound and magnetic fields. His measurements suggest that the signs that a building is haunted often have a rational, physical cause. The Ghost Experiment site includes synopses of several of Weisman's experiments.

Other researchers have used similar methods to try to determine the causes of ghostly activity. While no one has conclusively proven that ghosts do not exist, researchers have proposed a number of alternate explanations about physical or psychological causes for strange experiences. Some are simple - people can hallucinate or mistake reflections, shadows and unidentifiable noises for ghosts. Other theories are more complex. We'll look at some examples in the next section.

Ghosts on the Brain

Sleep states and altered states of consciousness can lead people to believe that they have experienced something supernatural. For example, skeptics have used sleep paralysis or a hypnogogic trance to explain encounters in which people see spirits while in bed and are unable to move or escape. Most people experience a hypnogogic trance once or twice in their lives, although it is far more common in people with epilepsy or certain sleep disorders. 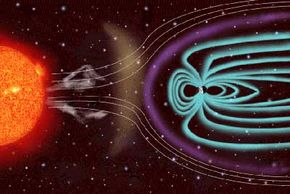 The Earth's magnetic field interacting with the solar wind
Photo courtesy SOHO consortium. SOHO is a project of international cooperation between ESA and NASA.

In some haunted locations, researchers have measured magnetic fields that are stronger than normal or which exhibit unusual fluctuations. These may be localized phenomena that stem from electronic equipment or geological formations, or they may be part of the Earth's magnetic field.

Some paranormal investigators think of this as proof of a supernatural presence -- the ghosts create the field. Others suggest that these fields can interact with the human brain, causing hallucinations, dizziness or other neurological symptoms. Some researchers have theorized that this is one of the reasons people report more ghostly activity at night. Because of the way the solar wind interacts with the Earth's magnetosphere, the planet's magnetic field stretches out on the side that's in darkness. Some researchers hypothesize that this expanded field interacts more strongly with people's brains.

Cold spots are a common phenomenon in buildings that are thought to be haunted. People describe sudden drops in temperature or localized cold areas in an otherwise warm room. Often, researchers can trace the cold spot to a specific source, like a drafty window or a chimney. The sensation of a lower temperature can also come from reduced humidity. In Wiseman's study at Mary King's Close, the locations reported to be haunted were significantly less humid than those that were not.

Several experiments have demonstrated that low-frequency sound waves, known as infrasound, can cause phenomena that people typically associate with ghosts. This includes feelings of nervousness and discomfort as well as a sense of a presence in the room. The sound waves may also vibrate the human eye, causing people to see things that are not there. Usually, these waves have frequencies of less than 20 Hz, so they are too low-pitched for people to actually perceive. Rather than noticing the sound itself, people notice its effects.

Sometimes, researchers can locate the source of the sound. The article "The Ghost in the Machine" by Vic Tandy and Tony Lawrence describes a low-frequency standing wave originating from a fan. The sound wave disappeared after the researchers modified the fan's housing. When the wave dissipated, so did the symptoms of haunting in the building. You can learn more about infrasound at the Infrasonic site.

The most skeptical researchers believe that all ghostly phenomena have rational explanations. Those who try to prove the existence of ghosts, however, claim that while some events have rational explanations, others can only be supernatural in origin. Regardless of whether ghosts are real, many people find them fascinating. This fascination has a number of likely causes, from curiosity about what happens to people after death to the comforting idea that deceased loved ones are still nearby. Ghost stories, like urban legends, can also express people's fears about the unknown and caution people about the consequences of actions.

On the other hand, in its Science and Engineering Indicators report, the National Science Board (NSB) asserts that belief in the paranormal can be dangerous. According to the NSB, belief in the paranormal is a sign of reduced critical thinking skills and a reduced ability to make day-to-day decisions. However, since it's virtually impossible to prove that something does not exist, people will probably continue to believe in ghosts and haunted houses, especially since unexplained events aren't likely to go away anytime soon. 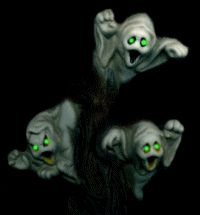 Up Next
How Ghost Busters Work
Explore More 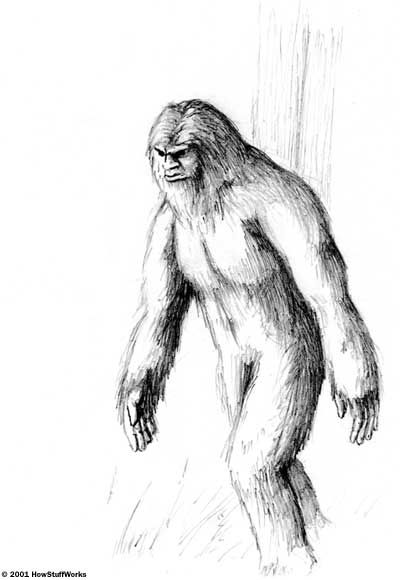 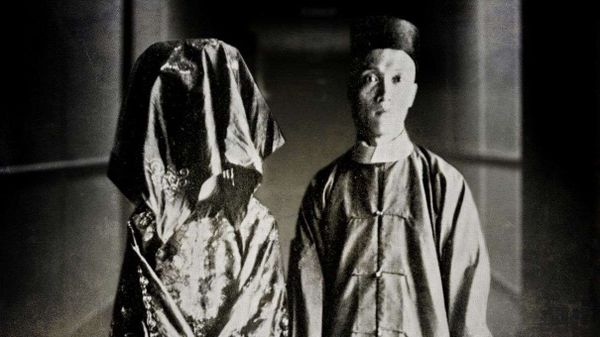 Keep Reading
Is It a Nice Day for a Ghost Wedding?
Explore More