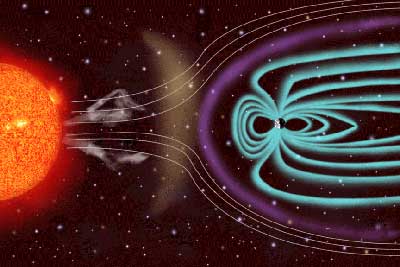 The Earth's magnetic field interacting with the solar wind
Photo courtesy SOHO consortium. SOHO is a project of international cooperation between ESA and NASA.

In some haunted locations, researchers have measured magnetic fields that are stronger than normal or which exhibit unusual fluctuations. These may be localized phenomena that stem from electronic equipment or geological formations, or they may be part of the Earth's magnetic field.

Some paranormal investigators think of this as proof of a supernatural presence -- the ghosts create the field. Others suggest that these fields can interact with the human brain, causing hallucinations, dizziness or other neurological symptoms. Some researchers have theorized that this is one of the reasons people report more ghostly activity at night. Because of the way the solar wind interacts with the Earth's magnetosphere, the planet's magnetic field stretches out on the side that's in darkness. Some researchers hypothesize that this expanded field interacts more strongly with people's brains.

Cold spots are a common phenomenon in buildings that are thought to be haunted. People describe sudden drops in temperature or localized cold areas in an otherwise warm room. Often, researchers can trace the cold spot to a specific source, like a drafty window or a chimney. The sensation of a lower temperature can also come from reduced humidity. In Wiseman's study at Mary King's Close, the locations reported to be haunted were significantly less humid than those that were not.

Several experiments have demonstrated that low-frequency sound waves, known as infrasound, can cause phenomena that people typically associate with ghosts. This includes feelings of nervousness and discomfort as well as a sense of a presence in the room. The sound waves may also vibrate the human eye, causing people to see things that are not there. Usually, these waves have frequencies of less than 20 Hz, so they are too low-pitched for people to actually perceive. Rather than noticing the sound itself, people notice its effects.

Sometimes, researchers can locate the source of the sound. The article "The Ghost in the Machine" by Vic Tandy and Tony Lawrence describes a low-frequency standing wave originating from a fan. The sound wave disappeared after the researchers modified the fan's housing. When the wave dissipated, so did the symptoms of haunting in the building. You can learn more about infrasound at the Infrasonic site.

The most skeptical researchers believe that all ghostly phenomena have rational explanations. Those who try to prove the existence of ghosts, however, claim that while some events have rational explanations, others can only be supernatural in origin. Regardless of whether ghosts are real, many people find them fascinating. This fascination has a number of likely causes, from curiosity about what happens to people after death to the comforting idea that deceased loved ones are still nearby. Ghost stories, like urban legends, can also express people's fears about the unknown and caution people about the consequences of actions.

On the other hand, in its Science and Engineering Indicators report, the National Science Board (NSB) asserts that belief in the paranormal can be dangerous. According to the NSB, belief in the paranormal is a sign of reduced critical thinking skills and a reduced ability to make day-to-day decisions. However, since it's virtually impossible to prove that something does not exist, people will probably continue to believe in ghosts and haunted houses, especially since unexplained events aren't likely to go away anytime soon.

See the next page for more information on ghosts, urban legends and related topics.