Time Travel Into the Future 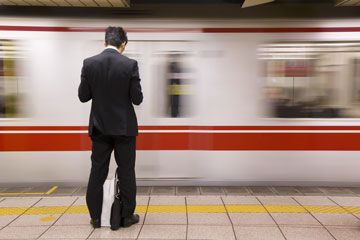 If you want to advance through the years a little faster than the next person, you'll need to exploit space-time. Global positioning satellites pull this off every day, accruing an extra third-of-a-billionth of a second daily. Time passes faster in orbit, because satellites are farther away from the mass of the Earth. Down here on the surface, the planet's mass drags on time and slows it down in small measures.

We call this effect gravitational time dilation. According to Einstein's theory of general relativity, gravity is a curve in space-time and astronomers regularly observe this phenomenon when they study light moving near a sufficiently massive object. Particularly large suns, for instance, can cause an otherwise straight beam of light to curve in what we call the gravitational lensing effect.

What does this have to do with time? Remember: Any event that occurs in the universe has to involve both space and time. Gravity doesn't just pull on space; it also pulls on time.

You wouldn't be able to notice minute changes in the flow of time, but a sufficiently massive object would make a huge difference -- say, like the supermassive black hole Sagittarius A at the center of our galaxy. Here, the mass of 4 million suns exists as a single, infinitely dense point, known as a singularity [source: NASA]. Circle this black hole for a while (without falling in) and you'd experience time at half the Earth rate. In other words, you'd round out a five-year journey to discover an entire decade had passed on Earth [source: Davies].

Speed also plays a role in the rate at which we experience time. Time passes more slowly the closer you approach the unbreakable cosmic speed limit we call the speed of light. For instance, the hands of a clock in a speeding train move more slowly than those of a stationary clock. A human passenger wouldn't feel the difference, but at the end of the trip the speeding clock would be slowed by billionths of a second. If such a train could attain 99.999 percent of light speed, only one year would pass onboard for every 223 years back at the train station [source: Davies].

In effect, this hypothetical commuter would have traveled into the future. But what about the past? Could the fastest starship imaginable turn back the clock?