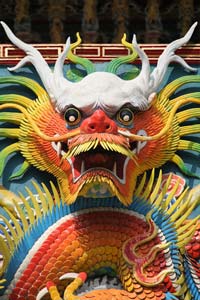 Though they may look as fearsome as any other dragon, in Taoism dragons symbolize yang -- the light forces in nature.
iStockphoto/Thinkstock

Sightings of fire-breathing, flying reptilian creatures have been documented all over the world and in many different cultures. Whether a dragon sighting is considered a good thing (or a very, very bad one) varies according to the mythology associated with it. For some people, dragons were cursed creatures known to ferociously devour fair maidens. For others, dragons could be a good omen. In Japanese culture, for example, most dragons were seen as benevolent creatures that protected people's earthly treasures.

Dragons have captured people's imaginations around the world-- and have been immortalized in their art -- since ancient times. Dragons' likenesses have appeared on stoneware vessels, paintings, woven tapestries and other artifacts. Some of the most famous dragon-themed artworks are the three Nine Dragon Walls located throughout China. The most intricate and colorful of the trio is the wall in Beijing's BeiHai Park. Built in the mid-1700s, it stands 69 feet (21 meters) long and 49 feet (15 meters) high. The sculptural wall appears to depict a row of nine dragons, but closer inspection will reveal an additional 626 smaller dragons [source: Shea].

Dragons were so notorious in medieval Europe that early cartographers penned the phrase "Here be dragons" onto maps to mark unfamiliar and potentially dangerous territories -- dragons represented the mysterious and hazardous unknown.

Today, dragon mythology still influences everything from popular culture to psychology. Dragons played a pivotal role in the "Harry Potter" series by J.K. Rowling and are even studied in classes exploring analytical psychology methods pioneered by Carl Jung.

In this article, we'll look at some of the dragon's most recognizable characteristics, delve into the facts and fictions that have created dragon mythology, and explore the symbolism surrounding dragons' lives and deaths. But how, exactly, do these winged creatures work? Find out on the next page.