The Symbolism Behind Dragons 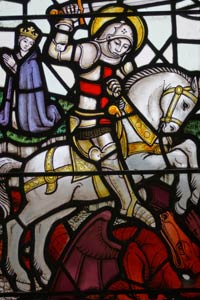 Winning success and love by smiting savagery, inside and out.
iStockphoto/Thinkstock

One of the West's most famous dragon slayers was immortalized in the English book "The Golden Legend," published in the 1480s. Believed to be part fact and part fiction, this story of England's patron saint -- St. George -- tells of a knight who came to the aid of a town besieged by a ravenous dragon.

The townspeople fed it two sheep a day to prevent further attacks on their children, and the king begrudgingly agreed to appease the dragon with his daughter. As the princess awaited a fiery death by dragon, St. George happened upon them both. He smote the dragon into submission and told the princess to lead it home -- at which point St. George killed it in front of the king [source: BBC].

Dragons like the one slain by St. George symbolize more than the natural forces of destruction. According to Carl Jung, who founded Jungian psychiatric theory, when a hero is fighting a dragon he is actually battling his own subconscious. And when a hero struggles to save an innocent hostage -- usually a beautiful maiden -- it serves a dual purpose: Not only does he save an innocent life, but the act of rescuing her requires the hero's personality to develop [source: Kalsched].

Not all dragons represent the Id, though. In Japan, O Goncho was a white dragon whose appearance signaled impending famine. (White, not black, is the color traditionally associated with death in Japan.) In many cultures, maleficent dragons like O Goncho are typically depicted with their heads pointing down, while dragons that symbolize benevolence are shown with their heads pointing toward the heavens.

This dichotomy between good and evil is what differentiates most Eastern and Western dragons. Western dragons symbolize destruction and death, while Eastern dragons symbolize fortune and great power, both good and bad. In Korea, for example, a dragon signifies the circle of life and is often portrayed with its body in a circular position to symbolize the culture's cyclical view of time [source: Popeater]. The Chinese zodiac, which includes a dragon, further illustrates this view: The sign, along with its 11 brethren, repeats every 12 years [source: Chinese Culture Center].

Luckily, you won't have to wait that long to celebrate all things dragon. Once a year, the city of Atlanta hosts Dragon*Con weekend, which you can learn more about on the next page.