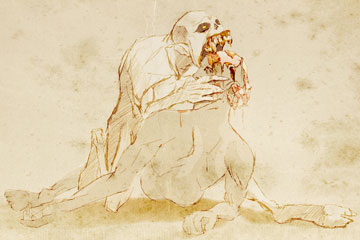 Who says ghouls don't love politics? They love to pick the brains of famous politicians.
Drawing by James Basom Seaman

You don't hear much about ghoul politics and with good reason. In some tales, ghouls may exist as lone scavengers in death-haunted places or as members of crude, doglike packs. Largely ruled by their vile appetites, their social structure is generally limited to squabbling over grave spoils.

Particularly powerful ghouls sometimes rise to positions of power over their own kind. The world of Dungeons and Dragons describes several varieties of smarter and stronger ghouls, such as the ghast and the gravetouched ghoul. Other tales mention ghoul kings, like the ferocious and debased Vomikron Noxis in the work of Brian McNaughton and Vorag Bloodytooth in the world of Warhammer.

As you might imagine, these brutal regimes tend to get along quite poorly with humans. As related in the Arabic text "The Thousand and One Nights," the adventurer Sinbad encountered the ghoul king of the Magians on his fourth voyage. The flesh-eating sovereign attempted to fatten up Sinbad's stupefied crew with a steady diet of coconut oil.

But don't count out the possibility of a refined ghoul civilization just yet. Other tales describe far more organized communities, often united through religious devotion. In the D&D world, ghouls build subterranean shrines and temples to honor their demigod Doresain, whose doctrine is one of ravenous, insatiable hunger.

Clark Ashton Smith's short story "The Charnel God" describes a community of ghouls who actually co-exist with humans in the city of Zul-Bha-Sair. Here, they serve as the city's corpse collectors in service to the benign god Mordiggian. In doing so, they provide a vital public service while also satisfying their own dark nature -- not unlike the niche dominated by vultures and other scavengers.

According to the 1950s horror comic "Tales From the Crypt," a similar ghoul/human cultural symbiosis survived well into the 20th century. In the tale "Mournin' Mess," members of the nonprofit Grateful Homeless Outcasts and Unwanted Layaway Society (GHOUL) disguise themselves as humans and provide free burials for the impoverished. You can probably guess what they do with the corpses.

In Neil Gaiman's "The Graveyard Book," the ghouls even have their own capital, a dark necropolis they call Ghûlheim, though Gaiman reveals that its stone towers are "something they found, long ago, but did not make."

How did ghouls rise from desert scavengers to nonprofit organizers? On the next page, we'll explore their grisly history.