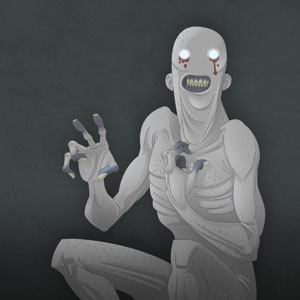 Some experts on monstrous and magical anatomy attribute the ghoul with a powerful, paralyzing touch.
Image courtesy M. S. Corley

As of this writing, modern science has yet to study the anatomy of the ghoul -- or even acknowledge its existence. Horror stories and folktales provide varied descriptions, but it's difficult to say where one source accurately describes a ghoul subspecies and another errs entirely. For the most part, however, this is what we know:

Appearance: While some souls define ghouls as evil spirits rather than undead creatures, most accounts give them physical bodies. They're generally slumped, bipedal humanoids, although they often scramble and crawl on all fours due to their stealthy nature and tendency to occupy cramped tunnels and tombs. Their bodies may appear emaciated and doglike, but particularly gluttonous or powerful ghouls may grow quite fat on indecent delicacies. Their skin may be gray or pale, and the flesh itself may appear hairless, rubbery or even scaly -- though many Middle Eastern tales depict them as hairy ogres. Exact facial features seem to differ as well, from nearly human to bestial and canine.

Diet: Like many monsters of legend, ghouls crave human flesh. What sets them apart from other mythical man-eaters, however, is their preference for scavenged carrion. Although these ghastly creatures won't turn down a living meal if it presents itself, their bodies are largely adapted for a diet of corpses. Sizable claws enable them to dig through earth, and their enhanced strength allows them to rip through most caskets. Powerful jaws and often-bestial teeth make short work of cadavers, which they gobble up bones and all.

Habitat: Ghouls frequent places of human death and misery, especially if the location affords them steady access to fresh graves. Nocturnal by nature, they typically avoid all sunlight and maintain a network of tunnels to creep about below ground.

Intelligence: Intelligence varies greatly among the creatures, depending on the account. In some tales, they're no more than primitive beasts ruled by their hunger, while others afford them language, reason and grisly senses of humor.

Self-defensive adaptations: Their stench is enough to overpower most humans, and some boast a paralyzing touch. Occasionally, ghouls use simple weapons such as spears, but mostly they depend on their powerful, filth-tipped claws to fend off adversaries. Factor in a deadly bite, and the ghoul makes for a fearsome opponent.

Magical powers: Some stories describe an even more devious power of the fiends: the ability to shape-shift. Ghouls used this nifty trick to deceive humans and lure them to their deaths. More modern reports, such as those of fantasy fiction and horror author Brian McNaughton, endow ghouls with the power to absorb the memories of the dead through the ingestion of sense organs. When such a ghoul consumes the heart and brain of a person, it temporarily assumes both the appearance and memory of the departed. In describing the more spiritlike ghouls, some Arabic tales attribute them the power to demonically possess humans as well.

Next up: the life cycle of the ghoul.