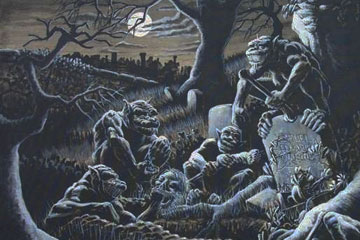 You know better than to wander the cemetery at night, yet here you are, strolling a landscape of weathered granite and dying flowers.

The light of a waning crescent moon conjures up strange shadows, twisting obelisks and statues into grotesque forms. By some lunar trick, they seem to creep along beside you, herding you toward some central point in the necropolis. You find yourself at the foot of a defiled tomb.

Something pale scuttles past a tombstone. A cackle echoes amid the monuments. When you tear your gaze from the gnawed bones and ghastly scraps spread around your feet, you find yourself in the loathsome company of ghouls.

While we often use the word as a catchall for Halloween horrors and morbid souls, the ghoul is a very specific creature of myth and legend. It's neither a vampire nor a zombie, but a creature somewhat in-between. From their ancient origins in Middle Eastern folklore to modern retellings in horror fiction, ghouls have haunted the shadows of human death for millennia. They've feasted in the catacombs. They've fattened themselves in the wake of conquering armies. They've shifted forms with arcane magic and honeycombed the hills with their vile tunnels and lairs.

In this article, we'll study the anatomy, history and culture of the ghoul. As science remains largely mute on the topic, we'll attempt to weave our understanding from legends and fiction.

By the end, you'll have a better grasp of these creatures of the night.