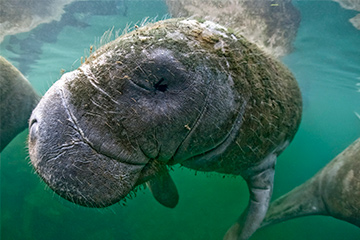 Would you mistake this humble West Indian manatee for a mermaid?
© Christian Zappel/Westend61/Corbis

During World War II, Japanese soldiers stationed on Indonesia's Kai Islands reported encountering a "monster" on the beach. It had a mostly human-looking body, but with webbed hands and feet, spines running down its head and neck, and a mouth that looked like a carp's [source: Cryptomundo]. The villagers knew of these creatures, as they sometimes got trapped in fishing nets [source: Cameron].

Coastal dwellers and sailors are the most common reporters of mermaid sightings. Explorers like Christopher Columbus, John Smith and Henry Hudson all have reported seeing mermaids. Hudson saw one with long, black hair, fair skin, large breasts and a porpoise tail in 1608, near Russia [sources: Cavendish, The New York Times]. John Smith, after Pocahontas saved him, was in the West Indies in 1614 when he almost fell in love with a mermaid with long, green hair; he thought she was a woman swimming until he glimpsed below the waist. Columbus spotted three mermaids in 1493 but said they were not as pretty as he expected them to be [source: Stieber].

They've been seen in waters around Canada, England, Scotland, West Africa, America, the Netherlands and Israel [source: Stieber]. A videotaped "encounter" off the coast of Greenland became big news in 2013 when Discovery's Animal Planet promoted it, albeit in a fake documentary called "Mermaids: The New Evidence" that saw massive ratings and followed on the heels of its 2012 (also fake) show "Mermaids: The Body Found."

Here's how the 2013 program presented it: In 2010, marine biologist Torsten Schmidt (not an actual scientist) was with his team in the Greenland Sea, performing seismic mapping 3,000 feet (1 kilometer) below the surface, when they encountered sounds they'd never heard before. Perplexed, they recorded them and asked their employer, the Iceland GeoSurvey, if they could investigate further. The Iceland GeoSurvey rejected the request.

So Schmidt took a team down on his own, and they "found" something. In March 2013, they captured video of an encounter with a human-like creature with webbed hands. The rest is ratings history.

Not surprisingly, seafarers' mermaid encounters are often rejected — dismissed as hallucination, the result of too many days at sea or an overactive imagination [source: MarineBio Conservation Society]. Scholars have claimed that Christopher Columbus mistook manatees for mermaids (which might explain his disappointment about their looks). One officer who returned from the Kai Islands after the war asked Japanese biologists to investigate the monsters he saw, but they declined [source: Cameron].

And understandably so. The mermaid thing is a tough sell. That doesn't mean mainstream scientists don't talk about it, though.

Mermaids can become entangled in the superstition of sailors, the fear of watery death. An Old Norse text from the 13th century, "Speculum Regale" ("The King's Mirror"), describes a mermaid living off the coast of Greenland who acted as an omen. With soft hair, webbed hands and a frightening face, she appeared before a big storm, holding fish. If she tossed them toward the ship, it meant sailors would die in the storm. If she tossed them away from the ship, all onboard would survive [source: Stieber].