Are the Ica stones authentic? 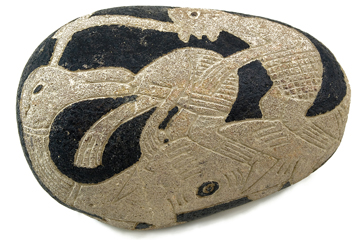 Trick of the tourist trade or authentic pre-Columbian art?
OlgaCanals/ThinkStock

Let's pretend I call you up and ask you to come over right away. I've been digging in my backyard, I say, and I found something that is going to rewrite the timeline of human history as we know it. When you get to my place, I show you some old-looking pots -- still covered in dirt -- that have stylized pictures on them. One has art that depicts ancient-seeming people performing open-heart surgery. Another shows humans riding dinosaurs.

Is your reaction (A) "Why did you spend so much time creating such a dumb joke?" or (B) "Oh my, alert the authorities! Human civilization was far more advanced than I previously understood, and also they lived in harmony with the dinosaurs. Call all the archaeologists!"

If you were Dr. Javier Cabrera Darquea, you would choose the latter. He did have pretty much that reaction when a Peruvian farmer gave him a stone tablet, one of the first to be dubbed an Ica stone. Cabrera claimed that the stone showed a picture of a fish long extinct before humans roamed Earth. According to Cabrera, this meant that either aliens gave humans some inside info about extinct fish at some point or the extinction/human timeline is wrong as can be [source: Carroll].

Now might be a good time to note that Dr. Cabrera was a medical doctor. Not an archaeologist. Not a paleontologist. Not a naturalist or a scientist. Nobody has ever figured out what made him think the (highly stylized and thus unrealistic) depiction of the fish screamed "extinct" to him. Moving on.

Undaunted, Cabrera claimed to have found caves in the area with loads more engraved stones -- 100,000, even. But he never got around to telling people where that cave was so that dating could be completed on the stones. And again, the stones were carved with images from modern times: surgery! Astronomical inventions! Flying machines! Humans hanging out with dinosaurs [source: Fitzpatrick-Matthews]!

Now, note that the farmer who gave Cabrera the original stone did admit to carving some of them. And it's true there's a ton of them, at least, which could lead one to consider that the sheer number of them could be a compelling point. But it's also been posited that other people in the region have also used them to ply the tourist trade -- and that some of the stones might be at least somewhat authentic pre-Columbian art from the region [source: Fitzpatrick-Matthews].

All in all, the claims of the farmer and Cabrera (who died in 2001) just don't pass the scientific evidence test. So alas, the Ica stones, far more likely a product of an elaborate hoax (with a bit of pre-Columbian authenticity thrown in for good measure), will probably never be given a label of legitimacy by any scientific or academic authority.